The revival of women’s test rugby in the pacific takes another step forward this weekend when the region hosts its first inter-regional tournament. 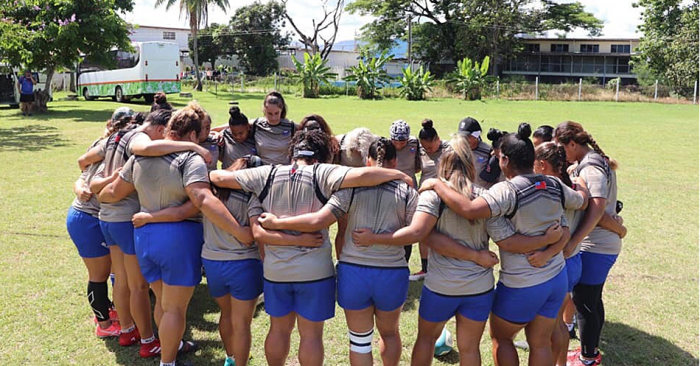 Fiji host a three-team test tournament, kicking off tomorrow, bringing together teams from the Pacific and Asia for only the second time.

In 2016 Fiji travelled to Hong Kong to compete for a place in the 2017 World Cup against the hosts and Japan. With only a recently revived test squad, Fiji were well beaten. Now following on from their win in last November’s Oceania Championship – and playing at home – this will be a measure of how much they and Samoa have closed the gap on Asia, and therefore the rest of the world.

Funding has been a serious problem for Pacific teams, but the Fijiana are now sponsored – the are officially the Fiji Airways Fijiana XVs.

“The girls came from different teams so it took a bit of time to try and gel them together plus getting a structure for them to follow through-out the session. The progress from the girls during training has been good, still a lot of things to learn for the girls, some of them are new to what we want to do but we’re progressing.”

Samoa – the Manusina – begin their tournament on Tuesday, when they will play Hong Kong for the first time. Coach Ramsey Tomokino has selected a squad of 27 players to represent Samoa, including 12 debutantes, adding to the core group that came second at the Oceania Rugby Women's Championship last year. Overall the squad includes 16 New Zealand-based players, six based in Samoa, four based in Australia and one based in the United States.

“We’ve increased our local complement of players, and obviously that’s always the goal," Tomokino said. It’s an opportunity to try out some new players and new combinations, and build towards November. The purpose of this particular tour is about building depth, and finding out who our best players are."

“Everything we are doing this year is about building for November, as the winner qualifies for the World Cup in 2021. We want to try and perform in these games but everything is building to selecting a squad towards November. Hopefully we can get a win along the way, but the main focus for me is let’s be competitive and we can then start building. It’s an opportunity to get test match rugby, an opportunity to expose our girls to more rugby and that’s what we need."

Samoa lost to Fiji 43-12 in Oceania Championship last year. “That’ll be a good benchmark to see where we’re at," Tomokino said.

Hong Kong see the tournament as a “handy fill-in” for their squad after the 2019 Asia Rugby Championship was cancelled and “an ideal opportunity for the team to prepare on multiple levels”, says coach Jo Hull.

“We are two years into our four-year Rugby World Cup cycle now, so this is a great opportunity for us to blood more new players. We have managed to build some depth in the programme now and this is a great chance to get more exposure at international level.”

“With no ARC this year, we wanted to take the opportunity to play teams outside Asia. Previously, we have been touring in Europe, playing Spain and Wales, which was a massive step up for us. Now we are looking for competition with teams like Fiji and Samoa, for their physicality, but also because it leads in to the World Cup qualifier.

“Next year, our target is to finish first in the ARC, but if we go to the repechage we would be playing teams like Fiji and Samoa so this suits our objectives on several levels.”

Chief amongst those objectives is continued development of a growing but young squad and increasing opportunities for the players, with nine new caps included in the tour to Fiji: Riva Brill, Abigail Chan, Chan Hui-tung, Rachel Fong, Jasmine Fung Hoi-ching, Iris Lam, Liu Yuen-ting, Zoe Smith and Wong Kai-ying.  Most of the new faces are from the next wave of players emerging from the Union’s intensive age grade programmes with eight of the new caps from this group, the exception being Valley back Zoe Smith. The group departs with a win behind them, after 20 of the 26-strong squad were selected for Hong Kong’s tour of Singapore earlier this month, including six of the debutantes.

“This is a really young squad with a lot of up and coming players from the National Age Grade programmes. These girls have all been playing at Premiership level domestically and we were pleased to see how hard they trained and worked for the results on that Singapore tour.”

With the sevens team also preparing for upcoming competition only Colleen Tjosvold, Jessica Ho and Pun Wai-yan have been included from that squad.

“It just creates more opportunities for other players in the wider squad, and gives us a chance to really look at a lot more of the group.” “While we still have a lot of work to do, this shows that that strength in depth is coming in Hong Kong and will bolster the national team and women’s rugby as a whole,” said Hull.

Hull is keeping her expectations in line given the tour will provide a real stress test for the newcomers, “We don’t know what to expect, we just have to see how they go,” she said.

Eight debutantes have been given spots in the opening game against Fiji, with Brill starting at flanker, Smith featuring on the wing, and Abigail Chan at fullback.  Chan Hiu-tung, Iris Lam, Wong Kai-ying and Liu-Yuen-ting are all included on the bench for the opening test. Also starting from the bench is Rachel Fong, whose older sister Rose Hopewell Fong will start at fly-half.

“We have to do this now,” said Hull. “We have seen them train, play at club level, and in Asia after Singapore. Now we need to challenge them at the elite international level. These girls have been in the programme for a few years now. This is a natural environment for them and a chance to step up to the next level and they deserve the opportunity.”

Fijiana will take on Hong Kong 4pm {FJT} in their first match at Churchill Park in Lautoka on Friday.

On Tuesday, Hong Kong faces Samoa at the same venue and in the final match of the Aisa Pacific Championship, the Fiji Airways Fijiana XVs will take on Samoa at 4pm {FJT} in Lautoka Saturday week.