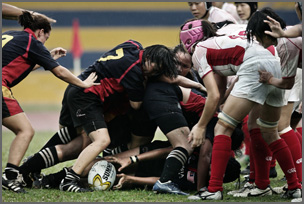 Hong Kong will play Singapore this weekend as part of the final build-up towards the Asian World Cup Qualifiers in November. The Asian rivals will be looking to fine tune their games just weeks out from the qualifiers which will determine who gets the last spot at the Women's Rugby World Cup 2010.

Singapore (pictured in action right) will come into the game on the back of a test match last weekend against Malaysia which they won comfortably and theyll be hoping for a stern test against Hong Kong before they face Japan in the qualifiers.

Hong Kong meanwhile are to play Kazakhstan in their qualifying game in a match that they can expect to be tough and physical. Against Singapore they will field some young new talent though they are expecting the game to be very tight. The two sides last met at 15 aside level last December when Hong Kong won a tough match 5-0.

If last December is anything to go by when we played Singapore on their own turf, then I would say we are going to have a very close physical game and it will be a great challenge for us. We have a lot of new young exciting players who will be playing for the first time in our national squad, said Ruth Mitchell, a development manager at the Hong Kong Rugby Union who also works with the national womens squads.

Mitchell says that there has been plenty of hard work in the buildup to the game with the national squad training twice a week and having maintained fitness programmes over the summer.

This year we have had a very busy calendar overall. After the World Cup Qualifiers, in December our 7s squad will be playing in the East Asian Games which is being held in Hong Kong so we are planning for this also, Mitchell added.

Despite womens rugby being a developing sport in Hong Kong there is plenty of action to go around for the countrys top players. Every year there are the Asian Championships for both 7s and 15s teams and the Hong Kong 7s team plays annually in the well regarded Hong Kong International 7s Tournament every March.

The domestic game there is growing as well. Weve now got a great structure starting from mini through to Colts, U20, a development 10s league, and a senior women's 15s division, Mitchell said, so we have covered all age groups, with good pathways for any potential players to make our national squads.

Support from the Hong Kong Rugby Union, she adds, has been a major help. I can look back over the last 17 years when women's rugby first started in Hong Kong. We where given 100% support in everything we did then and we still get that help today. We want to do well at the qualifiers and we would like to win a medal at the East Asian Games.