Only two weeks into the Australian Super W – but can anyone now stop NSW? 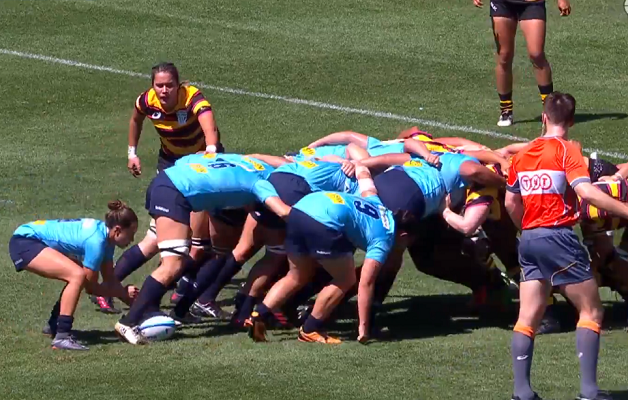 The second week of the Super W in Australia saw the debut of the fifth team in the tournament, and a game between the two winners from week one.

On Saturday the Brumbies opened their account at home to Queensland, who had lost to NSW in week 1. But this week was Queensland – maybe aided by having shaken off the dust the previous weekend - who were dominant, with a big 42-5 win at the GIO Stadium in Canberra.

The Reds began the match in solid fashion scoring two penalty goals off the boot of Lavinia Gould in the first 15 minutes, but the Brumbies struck back quickly with a diving try from Peta Cox which closed the gap to just one point.

Unfortunately, that was to be the highpoint for the home team. In an outstanding passage of play, that went end-to-end in the 30th minute involving some strong passing by Treherne and Cramer, Lavinia Gould pulled off what was an impressive team try for Queensland to extend the lead to eight points, 13-5 where the score remained at the half-time break.

Despite the scoreline, the contest was not one-way traffic and the Brumbies challenged Queensland all the way through the experience of key forwards Milward and Burrows giving the hosts strength in attack. Nonetheless Queensland made an early statement in the second half through a try by young star Lefau-Fakaosilea extending their lead to 18-5.

Great offloading and teamwork across the park by Queensland led to a third try as Liz Patu crashed over under some hefty tackle pressure. Their confidence grew as the second half progressed and the Brumbies struggled to keep up the pressure on the visitors. Queensland was not only strong in its attacking game, getting a lot of time in the opposition half, but solid at the breakdown when in defence.

Brumbies skipper Shellie Milward was sin-binned in the 55th minute not helping her team’s cause and a short time later, Queensland capitalised on the Brumbies being a player down with a brilliant try to Ivania Wong in the corner.

Adding to the Brumbies pain, with just over 10 minutes left in the game, captain Milward was again pinged by the referee and with a second yellow card and so was off with a red for an intercept infringement.

In the 74th minute, Sarah Riordan made a powerful run to the line going through three defenders to score her team’s fifth try of the game, the fourth of the second half, and shut the door on the Brumbies hopes.

On the heels of that, the 17-year-old star of the Brisbane Tens, Lefau-Fakaosilea, also broke through the tiring defence and ran in for a double for the day and push the score out to 42-5 following a successful conversion.

For the victors, Sammy Treherne’s performance was impressive as she keeps going up a gear with each match she plays.

The theme of the day for Queensland seemed to be flowing rugby with strong offloads across the park, and particularly putting all the important numbers on the stats sheet in a dominant second half.

On Sunday NSW and Western Force – winners in week one – met at the Allianz Stadium, and it was NSW who came away with a comfortable 32-10 win.

NSW had all the possession in the first 20 minutes and were soon on the scoreboard but the Force settled and made effective use of the ball, applying some attacking pressure. A brilliant break by Courtney Hodder resulted in a try to Tui Cope which levelled the score at 10 points a-piece. The 17-year-old try scoring sensation read the NSW defence line well to get the Force close to the line and open up the scoring opportunity.

An immediate try in reply by Atasi Lafai just before half-time saw NSW move to a 15-10 lead at the break.

The Force looked to have the best of the early attacking run in the second half but the NSW defence made the job of scoring difficult for the visitors. As the penalty count mounted for the Force, possession to NSW gave them some momentum in attack.

Two quick tries to NSW changed the complexion of the game in the blink of an eye.  Sarah Laman scored in the 57th minute under the crossbar and this was immediately followed by a fast paced run to the corner from Aussie Sevens player Shanice Parker.

A five point margin had quickly blown out to 17 and the task in front of the Force became that much bigger with a 27-10 scoreline.

The result was sealed when Parker ran in her second for the day with just six minutes left in the game and the score moved to 32-10.

The five try to one win for NSW underlined their dominance of the competition although it could be said that the Force were far from a push over despite the scoreline.

Fitness was definitely a key factor in the second half with the extreme heat felt by all players and regular water breaks were the order of the day.

NSW coach Rob Baumann was pleased with the form shown by his team as they secured the 32-10 win over the Force at Allianz Stadium.

“It was a tough day, the opposition was good and the weather wasn’t kind to us, but the girls certainly dug deep,” Baumann said. “I spoke to them about getting away from our structure. They certainly changed their attitude, consolidating the slender half-time lead and adding points at the back end of the second half."

Morgan, Lafai, and Kaiwai all caught the coach’s eye with Shanice Parker a stand out, but ultimately he credits the win to a great team effort. Shanice Parker agrees – it was all about the teamwork.

“I feel like we came together in this second game and moving forward now we’re really working well as a team,” Parker said.

Western Force coach Sebastian Delport put his team’s turn of fortune from last week’s big win down to not following the processes they have been trying to adopt in the their game plan.

“I think we need to get clarity on the style of game we want to play,” Delport said. “We’ve been trying to evolve the way that we approach the game since the start of the program and we showcased that really well last week. Now it’s a case of taking the learnings from this week about where we are on that journey and moving that forward to the Queensland game.”

The Force will take on Queensland Women in a fortnight after a bye next week.

For NSW, Baumann knows they have one more hurdle to get over next week against the Brumbies before they can take stock.

“I’ve said to the girls our first three games are going to be pretty tough,” Baumann said. “So we’ll get this block out of the way, have a bit of a break, then reload to have a solid match against the Rebels in the last round.”

After two rounds the progress of the Super W competition is looking promising. Parker believes the competition underlines the importance of the pathway and opportunities being created for young players.

“It’s really good because sevens has their pathways into the national program and now XVs has an opportunity to get into that Wallaroos squad. It’s really opened up a lot of options for all the young girls like me coming through.”