Aussies the pick of a stellar line-up 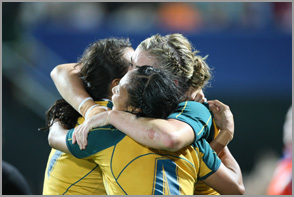 A stellar international women's rugby line-up has been announced to compete in the Hong Kong 7s in March.

Players from the reigning World Cup 7s champions Australia are expected to compete for the Aussie Amazons Invitational side but they face tough opposition in the form of a range of other top international sides.

While the Australians will be one of the teams to watch at the event they won't have it all their own way with some tough opposition taking part.

The China women's team are coming into the competition fresh from their success at the recent Las Vegas 7s, where they beat a top USA side in the final and proved that their growing emphasis on the 7s game is reaping immediate rewards.

The host nation Hong Kong are also competing alongside other Asian sides such as the Arabian Gulf team, Japan, Malaysia, Kazakhstan, Singapore and Thailand. All of those sides will certainly be eying the 7s game as as a form where they can find greater success in the years ahead and with another World Cup in 2013 and the Olympics including rugby in 2016, competitions such as this will become a regular fixture on the Asian calendar .

The other teams to complete the line-up will also be a threat. New Zealand are sending a selection from their Maori women's 7s squad, while South Africa will send a university team (SA Tuks). There will also be an appearance from Papau New Guinea.