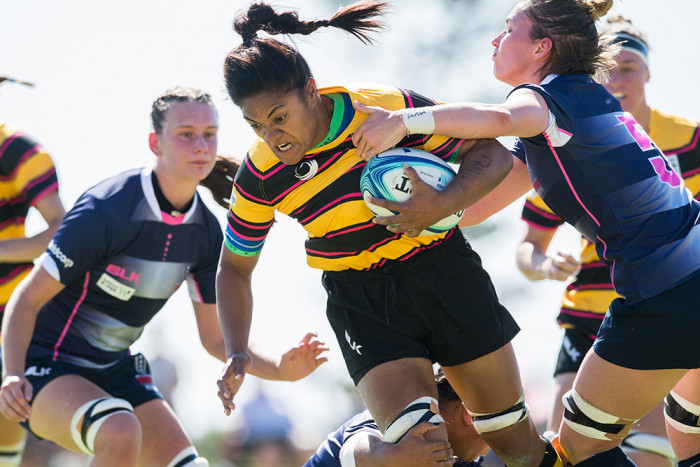 Brumbies missed out in the first round, leaving Queensland to open the first weekend, hosting NSW, and Western Force to take on Melbourne

And it was NSW have made history winning the first ever Buildcorp Super W match, squeaking past Queensland 18-0 at Suncorp Stadium.

In a match plagued by slippery conditions after a Brisbane downpour 30 minutes prior to kick off, NSW, guided by the accurate boot of captain Ashleigh Hewson, pinned QLD in their own 22 for large portions of the match.

It may have been smart, tactical kicking from Hewson that put NSW in the box seat but it was the brilliant feet of flyhalf Chloe Leaupepe that danced to the line from 40 out, beating an average tackle from Lavinia Gould en route to the line in the 14th minute.

Leaupepe's try was preceded by a Hewson penalty goal and that was all the scoring there would be in the first term, a half that was cut short after Nareta Masters was injured and had to be stretchered off the field. She was later cleared of spinal injuries, with medical staff stitching up a cut to her head and sending her back to the bench.

The second half produced more of the same, with Queensland pushing passes and subsequently struggling to build phase play, NSW relying on Hewson's kicking game and astute set piece to dominate territory and put the heat on the Queensland defensive line.

After fumbling the ball over the line twice in as many minutes, Atasi Lafai barged her way over in the right hand corner for NSW's second, with 53 minutes on the clock. That would be the final try of the afternoon, Hewson's second penalty goal sealing the result.

It was a well worked win for NSW but Queensland will be disappointed with their performance, particularly their inability to put any pressure on the NSW line in the second half.

Queensland's lack of go forward in attack limited the impact of star winger Alysia Lefau-Fakaosilea, who dished a pair of bone rattling hits but had very limited space with ball in hand.

On Sunday Western Force has claimed a dominant 85-13 victory over the Melbourne Rebels in the opening round of the Buildcorp Super W competition in Perth on Sunday.

The star of the show was 17-year-old Courtney Hodder who scored four of her six tries in the first 25 minutes of the game. With double digit tackle busts and some record breaking run metres for the game, Hodder certainly made her mark on the new XVs competition.

The Force never really looked troubled as the initial fast pace in warm conditions seemed to unsettle the Melbourne side. The Rebels woes were compounded when Sharlene Fagalilo was shown a red card for leading with her feet in a sliding tackle in the 26th minute. Despite being down a player, the visitors scored their first try right on the half-time break adding a much needed five points.

Unfortunately Georgia Cormick could not convert from in front for the extras and the Force went into the rooms with a 45-8 lead.

Rebels came out firing with some solid tackling in the second half and had more consistent possession than before the break. A yellow card on Forces’ Tara Reed just five minutes into the second half meant the numbers were evened up for a short time with both teams down to 14 players.

But it was not long until the Force reasserted control and ran in their first three tries of the second half in the space of just eight minutes, leaving the Rebels looking for answers.

Second half substitutions were made early by the home side and Rebecca Clough’s introduction to the action with some physicality in the tackle on the opposition players had the intended impact. The onslaught continued as Western Force ran in another three tries to bring the final total to 13 tries for the match with ten conversions while the Rebels added just the one in the 67th minute through Ash Marsters.

It was a dominant win by the Western Force and will have the eastern teams looking carefully at the potential of this team from the west – especially at the young talent in their ranks.

There was healthy sized crowd in attendance at the picturesque ground, close to the famed beaches of Cottesloe, which will please the competition organisers and they were given an inspiring display of women’s rugby from the home side.