Australia and Colombia squads for Olympics

Pool A rivals – and top and bottom seeds – Australian and Colombia have announced their players for the Games in Rio. 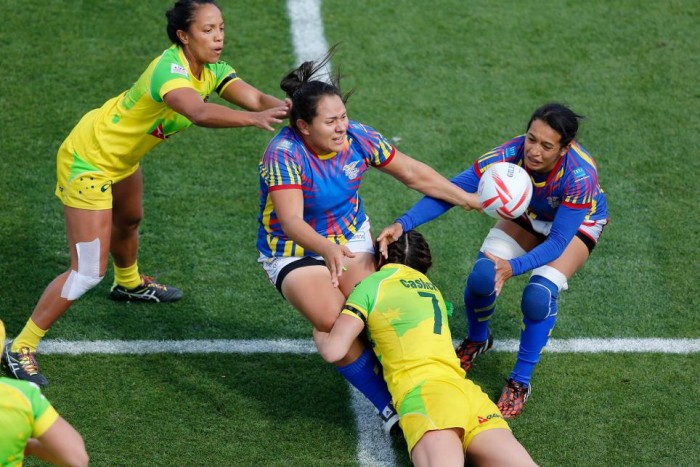 Australia and Colombia met in the World Series in Atlanta (Photo: World Rugby)

Eleven of the 12 players who lifted the World Series trophy in Clermont are in the Olympic squad annonced by Tim Walsh earlier this morning. Of players who made two or more appearences in the last series only youngsters Tiana Penitani, Brooke Walker and Dominique Du Toit miss out, though given their age all three have a very chance of being in the running for Tokyo in four year's time. Tim Walsh has already said that Rio is just the start for most of his players. “I do believe these girls, the majority of them, will be targeting back-to-back World Series and the 2020 Tokyo Games. I envisage most of them taking this as a ­career and moving on to the next Olympics.”

The only recent injury concern was Gemma Etheridge, after her surgery to accelerate her recover from an ACL injury, but she amptly demonstrated her return to fitness at the end of the season.

“It’s so surreal for all of us and I don’t think it will really sink in that we’re going to be Olympians,” Williams said. “Our goal is to go to Rio and win gold and it is something we speak about every day. The world series win has certainly given us the confidence to achieve that goal. We are with each other 24/7 and everyone really gets along and gels with each other.

“We have a great belief in one another and know each player brings something unique to the team. Parry is a workhorse, Caslick has great footwork, Green is super quick — we know what each player’s strengths are and we use them to our advantage.”

“The tournament in Rio is about who is the best on the day and not who has gone the best all season,” Parry said. "It’s a whole different ball game in Rio with the competition being across three days instead of two which should ensure a more exciting style of rugby as we have a little bit more time to recover. It will be a massive challenge and a lot will depend on the rub of the green in Rio.”

Colombia announced their squad on Wednesday afternoon, local time, with the big headline being the absence of former American Eagle Nathlie Marchino for what she describes as “political reasons”:

"It's w/ a heavy heart that i share that I was left off the roster for political reasons. Thx everyone 4 ur support https://t.co/sjODWwUYIv — Nathalie Marchino (@swissbeatz) July 13, 2016"

Coach Laurent Palau announced his squad with Alejandra Betancur as captain  and Solangie Delgado her vice-captain.  The squad also features veteran Guadalupe López, who scored the last-gasp winning try against Argentina in the South American qualifier that shocked everyone and sent Colombia to the games.

Nine players in the squad from Medellín, the centre of rugby in Colombia, two from capital city Bogotá and one - Katherinne Medina - from the northern region of La Guajira, who will become the first sportsperson from that area to go to an Olympic Games.

“Our main goal is to enjoy the experience of being in an Olympic Games,” explained assistant coach José Manuel Diosa. “On the field our main goal is to finish ninth and in doing so securing a core place in next season’s World Sevens Series.”

Even if that target is not achieved, Olympic qualification has had a huge impact says Andrés Gómez, President of Federarción Colombiana de Rugby, who said it was “a motor for the development and growth of women’s rugby in the country. We have had huge support from the Colombian Ministry of Sport, other government offices, the local Olympic Committee and, of course, World Rugby.”

Playing numbers are rising, with girls aged 15 and 16 already being targeted for the next Olympic Games.

Other squads that have been announced: