A second tournament win sent Australia to the top of the WSWS rankings, a head of New Zealand. 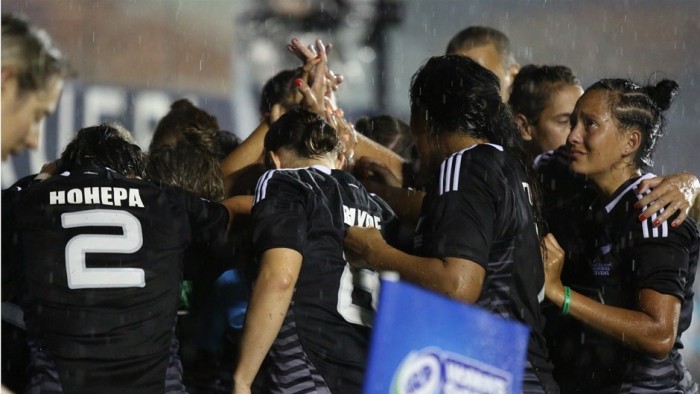 What began as gloriously sunny day ended in heavy rain as Brazil’s “City of Showers” more than lived up to its nickname. This had an effect on the quality of play in the final round of games, emphasising how tired teams were becoming after four days of highly competitive sevens in eight days.

Although disappointing for local spectators – the two South American teams won only one of their ten games over the two days – the tournament was another victory for the Southern Hemisphere.

Remarkably three of the four teams in the Bowl were core sides. In the first semi-final Brazil were too canny for Ireland winning 30-0, and the United States far too strong for Argentina, winning 35-0.

The 11th place game was a great battle, with Ireland winning 17-12 only after a last play try for Argentina was ruled out due to a double movement. The Bowl final, on the other hand, was rather more one sided with the United States in command as they eased to a 21-0 win,

The quarter finals opened with Australia taking on Japan – a repeat of the previous day’s pool game, and a repeated result. Australia with most of the possession in the first half were 17-0 up at the break, and carried on to win 27-0.  England gained revenge for their defeat in Moscow with a close 10-0 win against Russia, before New Zealand took on the Netherlands. The Dutch had most of the ball, but New Zealand absorbed their attacks before repeatedly breaking away to score – the result being a 35-7 win. And finally Canada reversed their defeat on Day One with a 22-0 win against Spain.

Despite their difference in stature, Japan again pushed Russia all the way before going down by a single try, 10-5, after which the Netherlands were unable to repeat their exciting pool win over European rivals Spain, who reached the Plate final with three unanswered tries.

Japan took 7th place with a 13-5 win over the Dutch, both teams looking exhausted.  Spain then survived the early loss of their captain, Marina Bravo, to win the Plate.

Australia’s great weekend continued with a massive 31-0 win over England in the first semi-final before New Zealand joined them in the final after a far closer 21-17 win over Canada – Canada coming within seconds of winning the game before New Zealand clawed their way back into the game, snatching the win at the death.

A brace of tries from Caslick was the core around which Australia’s second sevens tournament final win was based, as they beat New Zealand 24-12.