Australia growing all the time

Ahead of the final leg of the Women’s Sevens World Series this weekend in Amsterdam, we caught up with Australia head coach Chris Lane. 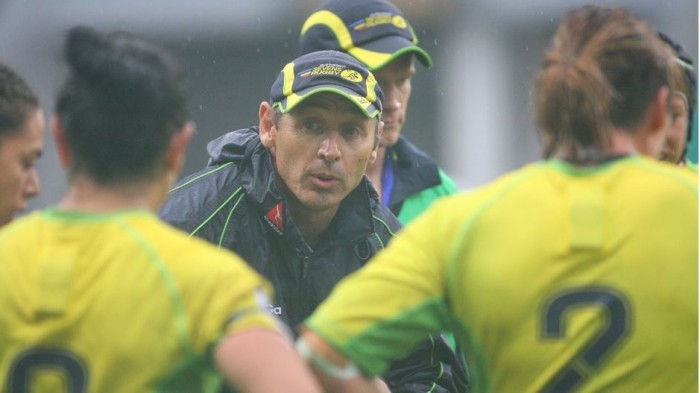 Lane led his side to the London Sevens final last weekend and they head to Holland this week sitting third in the Series standings after finishing fourth (Dubai), third (Houston) and seventh (China) in the three rounds so far.

In the first season of the global series, Lane has taken a longer term approach to developing his squad, being unafraid to try out younger faces at various tournaments – he included four teenagers in his squad for London and Amsterdam, including impressive 17-year old Tiana Penitani.

He believes hugely in the ability of his youngsters, and says he wasn’t surprised by them reaching the final at Twickenham.

“I had coached a lot of these younger girls at the Australian Youth Olympic Festival in Sydney earlier this year, so I was aware of their ability and fearless approach to the game. I was also confident that the experienced members of the squad would lead the way and educate the younger ones on and off the field about how we operate. It just came down to believing in each other and playing together as a team.”

“In the final, England’s experience helped them, but for us it was a great to play in front of such a large crowd that was very vocal with their support for the home team. The reality is we lost the final because we missed too many tackles.”

Lane has exposed a large group of Australian players to the international Sevens stage this year and takes his side to Moscow next month as the defending World Cup Champions. How ready are they?

“We have had a lot of injuries, which has forced some of the changes this year, but the World Cup has always been our immediate focus. We are defending champions and will be doing our best to defend the title. It’s a matter of trying to find the right combinations and if we don’t give players the opportunity to perform at international level we will not know how they cope. It is certainly a benefit for 2016 and beyond that we are discovering younger players who are performing well at this level, but the World Cup comes first.”

The pressure of being the reigning champions he adds isn’t a huge factor.

“We understand that pressure is something you put on yourself and we try not to do that. All we can do is prepare to perform to the best of our ability. Women’s Sevens has developed dramatically over the past two years, with many countries operating full-time programmes, but I am confident of putting on a good performance in Russia. Our group is coming together well. Lots of young players impressed in Hong Kong and China as well as London and deserve the opportunities they have been given. We have a few more at home working hard for their opportunity to impress as well.”

As for his view on how year one went of the World Series, he is positive while also hoping to see expansion.

“Year one has been very successful and it has been a great advertisement for women’s rugby. But while this year was a success, you can always improve. The next step could be more tournaments and more core teams. It would be good if we could get 16 teams competing at each tournament.”