Australia began the season with a bang, winning the World Sevens Series opener with a powerful win over USA in the final in Dubai in a weekend full of surprises and stunning performances. 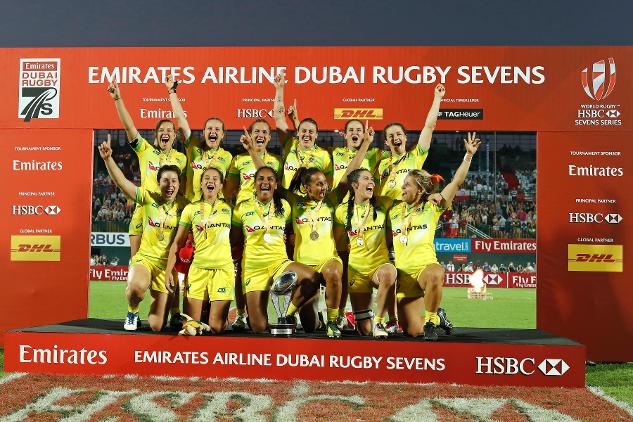 In the end, the final was as comfortable as it could get for the Australians, who through star player Emma Tonegato, scored early and never let up in a 34-0 hammering. With players like Charlotte Caslick, Emilee Cherry,  Sharni Williams and Evania Pelite in such good form, Australia's confidence will be sky high ahead of the next round.

The final was perhaps a game too far for the USA who caused the biggest shock of the tournament with their 14-12 win over New Zealand earlier that day.  If any side was going to beat the dominant NZ team, perhaps it was going to be the USA, given they were the only team to do so last season. New Zealand hadn't lost a match since that day in January and it had been two years since they had failed to reach a Cup Semi-Final.

The difference in the end was a brilliant score from Kelsi Stockert and conversion from Alev Kelter in the final play to win it 14-12.

Even leading up to the knock out stages, the competition had been full of entertainment and surprise. New Zealand had started as brilliantly as expected with three fine opening day wins over South Africa, the USA and France but with key players having travelled to Dubai via Monaco and the Player of the Year awards,  perhaps the travel took its toll as they were surprisingly sent home early.

The eventual winners Australia had cruised through their pool with wins over England, Japan and Russia in one of the tougher pools over the weekend. Russia showed their early season promise with a win over an England team who disappointed given the strength of their travelling squad, finishing in 8th spot.

Canada looked odds on to do well too after their pool round, with no problems against Ireland, Spain and and Fiji, with the Spanish really catching the eye with two fine wins after that loss.

With the USA grabbing the headlines in their Quarter Final, Australia were dispatching England with ease with three tries within seven minutes thanks to Tonegato, Emma Sykes and Pelite. The final two scores from Du Toit and Mahalia Murphy were enough to close out the game, despite scores from England's Amy Wilson-Hardy and Heather Fisher.

Elsewhere, the brilliant Baizat Khamidova with two tries, followed up by two from captain Alena Mikhaltsova, gave Russia a comfortable 20-0 win over Spain.

The final Quarter Final saw Canada and France go extra-time after finishing up at 19-19. Canada had a chance to snatch victory in normal time, but  Ghislaine Landry was unable to slot the conversion following Julia Greenshields' late try. In extra-time, and following a huge number of phases, it was eventually Breanne Nicholas who secured the Cup semi-final spot for Canada.

The Semi-Finals saw the USA carry on their form with a fine win over Russia while Australia were lethal against Canada, taking all of their changes before their convincing final display.

"We're absolutely ecstatic with that win. It's been a long time coming since that last gold medal,” Sharni Williams said. "The girls have worked extremely hard in the pre-season and it's great to get the rewards for that."