Australia’s women won their third gold in four 2022 Series events, but they had to be at their best to come from behind and beat an in-form Ireland side competing in their first ever Cup final. England’s women beat Málaga champions USA to take bronze, their first Series medal since 2019. 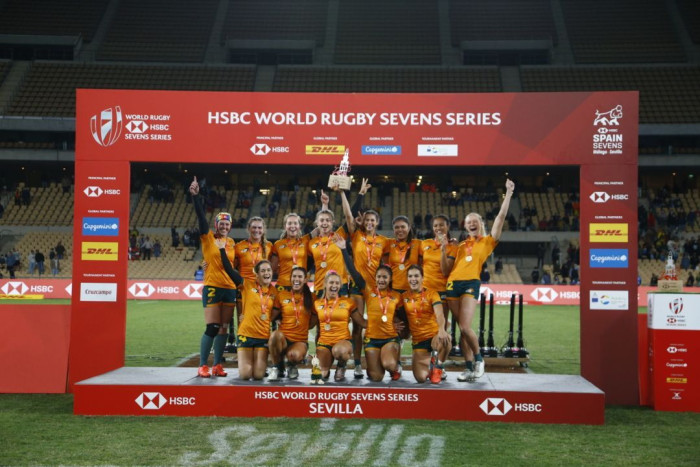 Faith Nathan scored a match-winning try after the buzzer to clinch a comeback victory over an Ireland side competing in their first ever Cup final.

Ireland’s rise to the showcase match, including a semi-final thrashing of England, was the story of the weekend in the women’s event, and they put in another superb performance to push the Series leaders all the way.

“It was a great final. We always said Ireland were a fighting team and they certainly did fight to the end, but it was awesome to see our girls out there fighting just as hard to the end with that final try,” HSBC Player of the final Dominique Du Toit said.

Ireland flew out of the blocks as Beibhinn Parsons pounced on a loose ball to go the distance after just two minutes, and they soon added a second try to set up a potential shock when Stacey Flood bounced off tackles to put the Irish 12-0 up.

Nathan pulled a try back for Australia before the break, but they left it late to complete the comeback in an intense second half.

Du Toit made another line break and surged towards the line after the buzzer, but was denied by a try-saving tackle from Amee-Leigh Murphy Crowe. Australia recycled the ball quickly to send Nathan over the line for a dramatic finale that broke Irish hearts.

In the women bronze final, England had a daunting task in front of them in their bid to win a first medal in almost three years as they faced an in-form USA side that won gold in Málaga just a week earlier.

But they put in an assured performance to triumph 19-12 and put the disappointment of a heavy semi-final loss to Ireland behind them.

It marked England’s first medal win on the Series since clinching silver in Japan in April 2019, but things started ominously when American flyer Kris Thomas found a gap in the midfield to go under the posts after two minutes.

Ellie Boatman burned down the right wing to get England back in it, but Thomas gathered the restart and ran straight through to the sticks to offer an immediate response.

Emma Uren crossed for England with the final play of the half, and the Red Roses saw it out in the second half as Heather Cowell rode some tackles to dive in at the corner and seal a memorable victory.

Ireland’s run to their second ever Cup semi-final was the story of day two in the women’s event, and the dream run didn’t end there as they ran riot in an outstanding 29-0 semi-final win over England.

Amee-Leigh Murphy Crowe continued her superb recent form with two tries, one either side of a Lucy Mulhall score, as Ireland went in 15-0 up at the break.

Their attacking intent continued as Beibhinn Parsons crossed the try line twice in the second half, with England unable to lay a glove on their dominant and determined opponents.

“It’s amazing, it’s what dreams are made of. We’ve worked really hard as a team, there’s a lot of love, a lot of heart. This is what we wanted to achieve. Ultimately, we want more girls playing sevens in Ireland, so this helps,” said Mulhall.

Australia reached their third Cup final of the season by edging Málaga champions USA 21-19 in their semi-final clash.

Tia Hinds’ early try was cancelled out by Kris Thomas and Jaz Gray scores, but Cheta Emba’s yellow card after the break let the Australians back into the game as Faith Nathan immediately sprinted under the posts.

USA’s discipline let them down again when Kayla Canett was sin-binned shortly after Emba rejoined the game, and Australia again profited as Maddison Levi went over the try line.

The Women’s Eagles narrowed the gap when their all-time top try scorer Tapper stormed down the right wing to run in her 100th Series try, becoming the first American women to reach a century - a milestone that her mate Stephen Tomasin also reached on that day. However, the missed conversion proved crucial as Australia held on with a two-point lead.

France finished fifth thanks to a 26-10 playoff win over Russia, but hosts Spain were pipped to seventh by Canada after losing their playoff 21-5.

The Sevens Series now takes a break until April, when the men will head to Singapore and Vancouver in consecutive weekends over 9/10 and 17/18, while the women head to Langford next on 30 April/1 May.