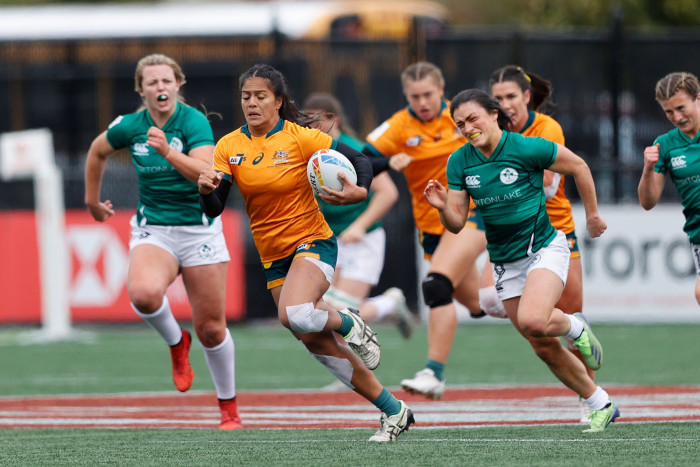 Australia were confirmed as the 2022 World Series champions in Langford yesterday (1st May) as, with one round to go, they cannot now be caught at the top of the Series.

It could have been argued that their win was due to the absence of rivals and defending champions New Zealand, who had been prevented from playing in the previous four tournaments due to COVID restrictions. However, Australia also put that argument to bed by also beating the Ferns in a classic final.

Sevens tournaments normally start slowly and build, but that was not the case in Langford. The return of New Zealand – and Fiji, who had missed both Spanish legs of the series, created a “Pool of Death” in Pool C where the two teams were joined by USA and England.

As a result the action was full on from the opening game, which saw the United States edge Fiji by a single point, though in practice they led (albeit narrowly) throughout the game. New Zealand then announced their return with a 31-point whitewash against previous round bronze-medallists England. The rest of the opening round went with form.

Fiji made up for their loss to USA with a convincing win against England to open round two, which also saw New Zealand ominously dismissed the States 36-0 and breeze into the quarter-finals without conceding a point. France, Ireland, Canada and Australia also went 2-0 to confirm their spots in the last eight.

In round three again Pool C was unmissable. Fiji had got to know New Zealand well after six-game a warm-up series last month and used that knowledge to not only breach the Ferns previously perfect defence, but also come close to winning the game, the Ferns only being able to tie the scores from the final play.

This left USA with a chance to take the runners-up spot in the pool’s final game, while leaving the door open for England if they could win well. The result was a terrific tussle that was tied at 12-12 at halftime before the States were able to take lead early in the second half, a lead they maintained to the end.

It was all about best third places now, and with Fiji locking up one of those with they tie against New Zealand, the eighth place was down to a battle between Brazil and Spain and points difference. Brazil racked up 38 against Japan, but conceded two tries, leaving Spain with a target of 27 against Mexico. This they achieved in style, passing their target before half-time before running up 53 points to win the game.

The quarter-finals saw France respond to two early Fiji scores, which had them 14-0 down after three minutes, to dominate the rest of the game and win a semi-final place 31-14. The Ferns, back on form after the Fiji scare, dismissed Canada 38-0 (during which Portia Woodman scored her 200th World Series try) while Australia brushed aside Spain 55-0. But the other quarter-final between USA and Ireland was not at all one-sided. The beaten finalists in the previous two legs were well matched and after a 7-7 first half, USA took a two point advantage into the final play where Ireland stole the ball, moving wide for Amee-Leigh Murphy Crowe to score. Ireland were in the last four again.

In the semi-finals France lead at half-time again New Zealand, but the Ferns were able to regroup and shut them out in the second period, scoring three tries to win 26-14 while Australia ended Irish hopes of a second final with a 26-5 win.

Irish heroics were far from finished, however, as they ended up with bronze after a four-try performance by Murphy Crowe saw them beat France 22-14.

And so to the final where Australia gained first blood through Maddison Levi, but the Ferns fought back to lead 10-7 at the break. A Charlotte Caslick score put Australia back ahead 14-10 soon after the restart, before Michaela Blyde regained the lead for the Ferns with a converted try. Into the final play the Ferns still lead by 17-14        , defending desperately, but after nearly three minutes of incredible tension Lily Dick finally broke through to score for Australia and win the game. With Du Toit adding the extras Australia took the title 21-17.