Austria have won the 2022 European Conference. 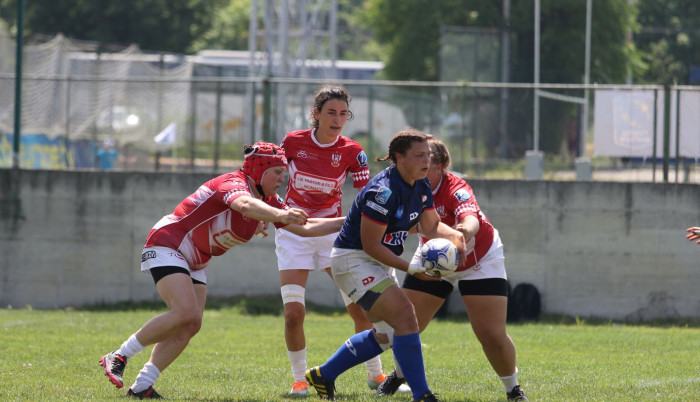 Austria will return to the second tier or European Sevens for the first time since 2018, and Bulgaria will play in the European Trophy next year for the first time following this year’s European Conference tournament, played at the King Peter Stadium in Belgrade last weekend.

The 13-team tournament – the largest field the Conference has had – was played at the same time as the parallel men’s event, necessitating a jump straight from the pool to the semi-finals. With five teams in Pool A, and four in Pools B and C, the top two from Pool A would qualify for the semi-finals, and only the winners from Pools B and C.

It was a somewhat controversial decision as the relative strength of teams (and pools) in the Conference is notoriously unpredictable, even more so given that there had not been a full tournament since 2019 (last year’s event being somewhat truncated due to COVID withdrawals).

Pool C in particular – with Latvia, Switzerland, Malta and Andorra – appeared to a very tough group, even before the start, and was fiercely contested with half of the games decided by a single score. In the end the crucial game came in the second round when Latvia and Switzerland met in a terrific battle, only decided by the game’s only try – for Latvia – 20 seconds from time. As a result Latvia made the final four, and Switzerland were left to contest for 5th place – which they won comfortably. Malta and Andorra also won their playoff games, meeting each other in the 9th place final, where Andorra reversed their pool defeat.

In Pool A Estonia became the 148th nation to make their international women’s sevens debut in the second round of games against Austria – the eventual tournament winners, who were in another level throughout the weekend. Estonia's Mia Oja, did score a try on her team's debut, but were well beaten 44-5. However, it is to their credit that these were the only points Austria were to concede throughout the weekend.

Second spot in Pool A went, in a surprise, to Luxembourg thanks mainly to a first round 17-12 victory over Lithuania. The result – plus wins over Estonia and Montenegro – gave them their first ever semi-final place in international sevens since their debut in 2006.

The final semi-final place was also a little unexpected as Croatia were top seeds in Pool B. But they struggled in their opening game with Slovakia, while Bulgaria looked strong. When the two team met in the pool’s final game it was effectively a knock-out, and by the point it was less of a surprise when Bulgaria took it 19-10.

The semi-final draw was crucial, and it was Latvia – probably the tournament’s second strongest team - who had drawn the short straw by being put up against the all-powerful Austrians, who swept past them 24-0. In the second game Bulgaria beat Luxembourg 22-5 to win their first place in a final, and their first promotion since their debut in 2003.

After all this the final itself was something of an anti-climax, Austria winning comfortably 50-0.