The Barbarians beat Wales 29-15 at the Principality Stadium in an entertaining match in which the visitors were simply too strong in the opening half. 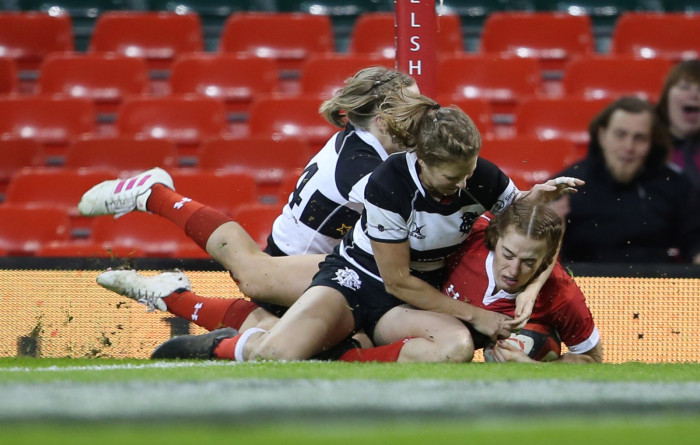 The historic match against Wales was a first for the Barbarians women and was only the second-ever double header for the famous club, after the men’s and women’s teams faced England in June.

Wales came into the match on the back of a very good few weeks, with wins over Ireland, Scotland and Crawshay’s but they were no match for the Barbarians in the opening half.

The Barbarians flew out of the blocks, scoring five first-half tries as they totally dominated the first 40 minutes.

Wales responded in the second half with Alex Calendar, Lisa Neumann and Keira Bevan scoring three tries as they shut out the Barbarians from any further scoring action, but the damage had long been done by the visitors.

Dyddgu Hywel – the scorer of Crawshay’s only try last week – scored against Wales for the second consecutive week while Anna Caplice, Charmaine McMenamin, Lauren Harris and Jenny Murphy were also among the try-scorers for the visitors.

Patience paid off for the Barbarians in the opening exchanges as Charmaine McMenamin forced her way over the line for the opening try on 11 minutes. Tess Gard’ner’s benefitted from McMenamin’s try under the posts.

Hywel, capped 31 times for Wales before retiring earlier this year, scored the Baa-Baa’s second-try straight from the kick-off. The left-wing broke with a superb run after dummying a pass, allowing for time and space to score - a try that Wales will have been defensively very disappointed with but one that will remain long in the memory for the player and the Barbarians.

Former Scotland international Lauren Harris then got in on the scoring act as she sprinted into the corner before touching it down underneath the posts after Ruahei Demant’s pass over the top. Ireland's Anna Caplice then scored a try before the interval for the Barbarians as Irish teammate Paula Fitzpatrick offloaded before she placed it down in the corner.

Wales started brightly in the early stages of the second-half and were rewarded for their efforts - Neumann keeping the ball in play despite pressure from the backs on the wing to score the Dragons first try of the match.

Barbarians were denied a try in the 56th minute as the Wales backs defended resolutely to block Eloise Blackwell from placing it down over the line. Keira Bevan then scored Wales’ second try of the half as the hosts continued to show a strong second-half performance.

Wales then went short from the line-out and Amy Evans offloaded quickly to Bevan in a set-piece move from the training ground. Five minutes from time Alex Callender crossed for Wales’ third try with an interception to end the match.