Weather conditions did not make it a classic game, but the first-ever women's Barbarians team made history against Munster. 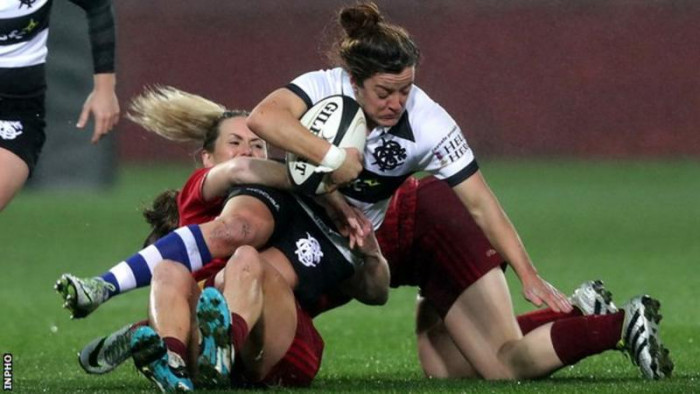 There was a sense of irony that the first try scored by the Barbarians Women in their inaugural fixture against Munster Women was a penalty try, given the club’s philosophy of exciting and free-flowing rugby.

But second half tries from replacements Ailis Egan and Georgina Roberts were both fine examples of Barbarian rugby.

Given that rain was pounding down, and the fact that the invitational side had only had their first on-the-field meeting on Thursday morning, a cagey first half was not surprising. Munster had opted to field a different starting XV for each half as they prepare for the Irish inter-provincial series which kicks off in December.

Barbarians head coach Giselle Mather believed her side fully bought into the ethos of the esteemed club. She said: “The first try I don’t think I could have predicted. It could have been a penalty try, so that is a Question of Sport question, ‘who scored the first try for the Barbarians Women?’ But the two other tries I am thrilled to bits with.

“The conditions were really hard to play in. Munster kept running the ball and fatigue levels were high because they put up a very strong defence. It was a fantastic achievement and our two tries were proper Barbarian tries.”

Language did not prove a barrier for France Test cap centurion Christelle LeDuff at fly-half, who  provided moments of savvy and skill. Munster were tough in defence with first half captain and Ireland 2013 Grand Slam winner Siobhan Fleming leading the way.

The second half saw a whole new Munster team and they dominated the early moments. But, after a raft of replacements the Barbarians shifted up a gear.

After a rampaging run from Lenaig Corson, a former heptathlete and sevens Olympian, the Barbarians magic that was demanded by head coach Mather, came when replacement Tracy Balmer of Scotland handed off to Irish front row colleague Ailis Egan.

Former England international Georgina Roberts rounded off the scoring for the Barbarians by finishing off a terrific team try.

Mather insisted it was an encouraging  opener for the Barbarian Women, adding: “The experience matched the Barbarian philosophy.”