Wings Elen Evans (Carnaerfon) and Sydney Gregson (Bristol) led the way as the Barbarians outflanked the Army to score seven tries at Aldershot. 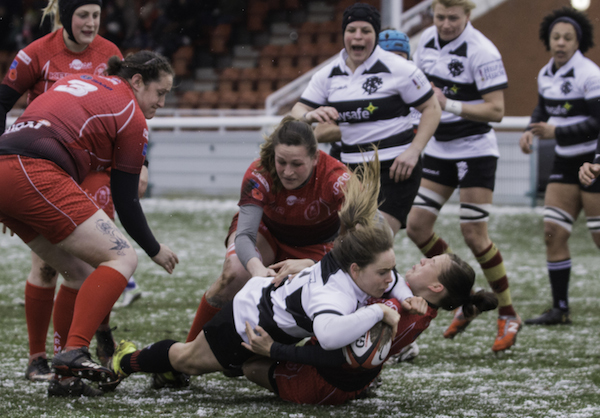 (Report: Barbarian RFC) The Wales and England fliers both touched down twice in the first half with the other tries coming from Saracens hooker Kat Evans, USA and Harlequins full back Jess Wooden and Wasps and Germany lock Nora Baltruweit. Ireland’s Nora Stapleton landed one conversion.

The Barbarians made light of the freezing conditions and snow flurries with a fluent first-half display, attacking from everywhere against an Army side that pinned them back for several spells.

They had a stand-out performer in centre Kayla McAlister with the likes of Spain flanker Isabel Rico Vazquez and captain Rachel Taylor not far behind.

Saracens hooker Kat Evans opened the scoring from close range, cutting back in following a scrum turnover, before McAlister created the openings for Elen Evans’s 50metre run to the line and Sydney Gregson’s dash down the right.

The Baa-baas kept the ball alive through a mixture of cross-kicks and offloads before Stapleton put Gregson in for her second in the 20th minute.

There were two more before the break with Wooden touching down on the right and Elen Evans grabbing her second.

It looked like the Barbarians would cut loose after the interval, particularly when Baltruweit powered over from close range in the 45th minute.

But the Army dug in after that, their replacements all made an impact going into the final quarter and the Barbarians had Gillian Bourke sin-binned 10 minutes from time.