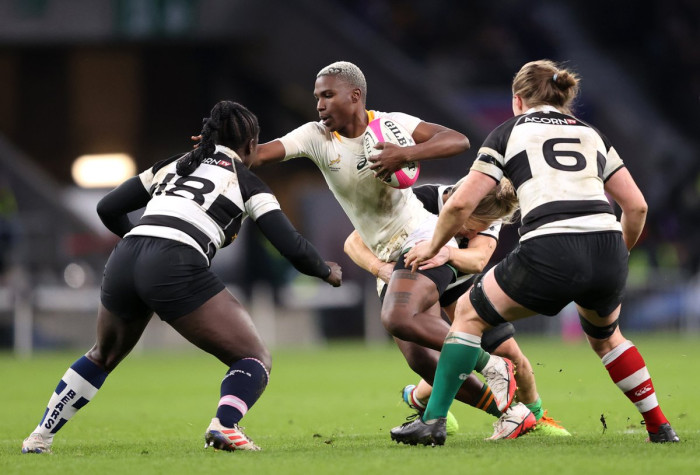 A record 29,581 fans were at Twickenham to watch the game, which was brought forward to be the main and only game of the day after the men's Barbarians match against Samoa was called off just 90 minutes before kick off following a Covid outbreak in the Barbarians camp.

The previous record for a women's test game was at the 2014 World Cup when 20,000 turned up and so although this was a rather unorthodox way of breaking the record, break it it did and the crowd were treated to a fine display of running rugby from the Barbarians.

The game was also played in a primetime weekend slot on BBC1 handing the women's game a rare spotlight on the country's most watched channel.

South Africa looked tired at the end of a four-match tour while the Barbarians had brought their strongest ever side together and the difference was stark.

USA winger Sarah had a hat-trick and England's Natasha Hunt scored twice in the ten-try rout, in a game in which Katy Daley-Mclean was outstanding in her final game of rugby before full retirement.

There were storylines everywhere, with tries too for Ciara Griffin and Lindsay Peat - also retiring from the test stage while Ayanda Malinga scored a great individual try late on for the Springboks to ensure they at least didn't leave with zero on the scoresheet.

South Africa winger Simamkele Namba was outstanding in defeat, as was centre Chumisa Qawe but they could do little to stem the flow of attack, with Anna Caplice and Lenaig Corson in brilliant ball carrying form up front.

With Hunt trying to run absolutely everything, there were plenty of mistakes too but the crowd didn't seem to mind.