Belgium power back to Euro Top 12

Belgium bounced straight back to the top of European women’s sevens with a dominant display to win the Division A Championship in Kaunas, Lithuania and with it promotion to the 2016 Women’s Grand Prix. 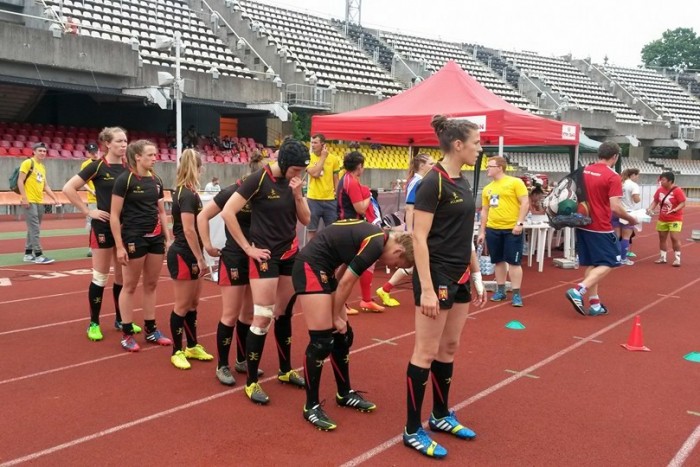 Rugby Europe’s women’s Division A is one of the cruellest of sevens tournaments. Twelves teams start the weekend with dreams of making it to the top table of European rugby to play the likes of England, France and Russia next year. But just over a day later, while two teams will have achieved that ambition, two more will be looking ahead to life in Division B, and several others will be thinking about what might have been.

In practice this weekend one team never seemed to be seriously in doubt about their future. Belgium – who were relegated last year despite not finishing lower than 10th in either WGPS tournament – were close to imperious. They set out their stall with a 50-0 win over hosts Lithuania in the opening game of the tournament, after which they barely looked back.

Elsewhere, however, this was a remarkably tight competition. Four of the opening round of six games went against seeding, with a highlight being newly-promoted Hungary holding Sweden to a 17-all draw, but Poland also thumped Moldova 33-0 and Switzerland beat last year’s semi-finalists Georgia 20-0.

However, Hungary’s performance aside, the results in practice reflected recent form. There can be very little to choose between teams at this level, but a lot can change in a year. This certainly seemed to be the case with Georgia and Moldova, who were not nearly as strong as 12 months ago.

Switzerland, on the other hand, had a superb first day, finishing as the only team – other than Belgium – to end with a 100% record. Two of the three games were close, but the Swiss held on to end the day as second seeds.

Sweden were third seeds and topped Pool B, which was no surprise for a team expected to do well. However it was an unimpressive performance after not only drawing with Hungary but also struggling against Poland – who, on the other hand, had a great day with two big wins.

The quarter-final stage was key to Olympic ambitions – to win was to receive a place at the European Repecharge Qualifier in Lisbon next month. What followed was another example that day one often no guide to day two. While Belgium carried on largely unruffled, Switzerland fell to Finland – who had only qualified as a best third place, and Poland could not rediscover their form as they fell to Romania. Sweden, on the other hand, did rediscover their form to reach Lisbon with a 20-12 win over the Czech Republic.

The semi-finals saw Belgium win an expected victory over Romania, but then Finland created possibly the tournament’s biggest surprise with a 17-12 win over Sweden, thus reaching the Top 12 only two years after winning promotion from Division B.

After the drama of the tournament to that point, the final was almost inevitably something of an anti-climax with Belgium winning 29-7.