England prop Sarah Bern talks about the challenges facing the players in the women’s Six Nations who are still juggling their day jobs with playing. 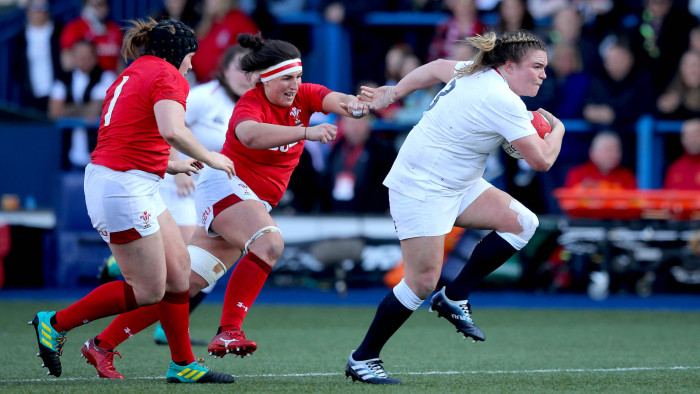 After England’s win in Bayonne star England prop Bern talked openly about England’s progress but also the situation facing those teams her side had beaten well.

England are the only fully professional team in the women’s Six Nations, though France have a squad which has mostly fully contracted players, with some operating on part-time deals by choice.

Italy have just announced deals for their players leading into the World Cup while Wales now have a combination of full and part time deals.

After Ireland’s loss last weekend, lock Aoife McDermott tweeted pointedly when she was back at work less than 24 hours later, and Bern suggests the situation is unsustainable.

“I would love it if everything was even, I have a lot of friends who play for Wales, Scotland and Ireland and it is really hard work.

“The Premiership is demanding more of our players, international demands so much of the players. It is time now for things to change and not just for the rugby itself but for the girls too and for players’ mental health. It is so tough playing a game like this and having to work the next day. I really feel for those players, and I am always here to shout and fight for their corner because everyone should have equal opportunity.”

England’s results have been such this year, that arguably they are forcing some of the major changes in the game and Bern says she believes the team has a role in improving things for everyone.

“For us England as a whole, we can still push, we can still grow and we can’t just settle, we need to keep fighting to be equal and carrying that momentum.”

She has also been thrilled to see the game's progress since the last World Cup.

"It’s been incredible. At the World Cup 2017 we remember the crowd out there was brilliant and we thought we had this huge buildup. But now since the game has been on BBC and the Premiership games have been shown, the amount of people watching has been crazy.

"To get back to back almost sell out games at home was phenomenal and I hope it continues. We love it and it will help to grow oue game."