Ahead of England’s game with Italy this weekend, Marlie Packer and Sarah Bern reflect on the extra challenges that playing amidst a global pandemic has brought. 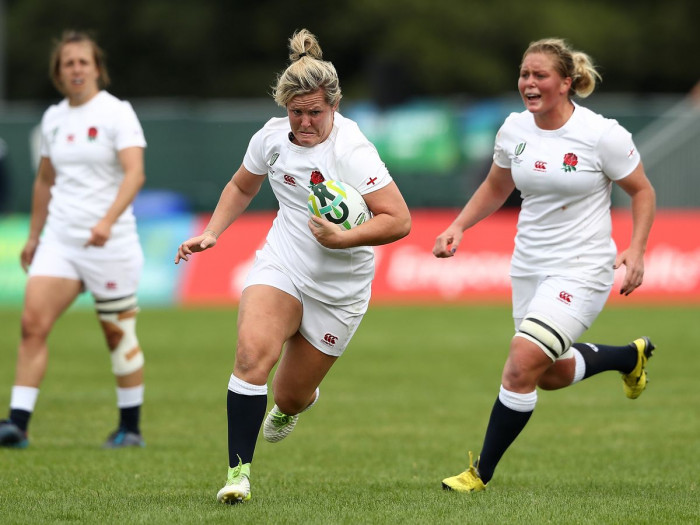 England will win the Grand Slam this weekend if they beat Italy, having secured the title last weekend thanks to Scotland’s draw with France.

Having played for several weeks in the Allianz 15s with different rules to the test game, Packer in particular acknowledges the different approach required to beat Italy.

“Obviously the laws are different in the league and a lot of players are not getting as many scrums. But in England camps we can do scrums and lineouts and the girls are in a good head space

“The variations in the league are there to get us back on the field and get playing. For us girls in contention for the World Cup we want to be on the field. If that’s the safest way to do it then we’ll do that.  This weekend is about us as professional athletes being adjustable.”

With the Ireland France game called off because of an outbreak in the French squad, and with the virus in Italy again on the rise, Packer says players do feel safe travelling.

“We have to test before we travel and there’s a lot of paperwork that goes with that. Then when we get there we have to stay in our bubble. There’s no venturing out for a walk or going to the shop for snacks – which some of us like to do!  -so it is going to be quite confined. I feel like we are in the safest possible space and we want to get out there and win the Grand Slam.”

“It was a bit weird, but it was a such a great game. To have such a competitive match between two sides was brilliant. I was excited about the game and so I was not so focused on what it meant for us. I was just enjoying the rugby!”

Bern also feels the front row in the squad we well prepared for the possibility of more scrums than they’ve been used to recently.

“We are as ready as we can be. We did a fair few scrums last week and you could feel it. We will do more today and we have done as much as we can considering the constraints we are under.”

“You always love scrums as a front row but the chance to do a lot of running in the league is fun for me! It is a different type of fitness but right now we are just getting what we can out of it.”

Packer, who became a mother for the first time recently,  believes that this England squad is well equipped to do well this weekend and later in the Autumn.

“There are some great players back. From my perspective it’s brilliant to have Alex Matthews back. She’s one of my best friends. We played at the 2014 World Cup together, roomed together and then played 7s together so having her in is a big lift.

“We’ve got a great leader in Sarah Hunter. You look at what she’s done this week and it shows what an incredible player and person she is. She inspires me on and off the field”

She believes Italy played well last weekend and bring particular threats, but that England are more focused on themselves.

“I thought they played well last weekend. Their lineout we have looked at a lot. They’ve changed their variations in how they play off that so we have to look at that. They’ve got key ball carriers like Giada Franco. We have looked at them closely but actually this is about ourselves and making sure we nail our game plan and do our work so the result can look after itself hopefully.”