Best ever finish for Italy

Victory over Scotland helped Italy to their best every Six Nations finish as they ran out 26-0 winners away from home in the competition's final game. 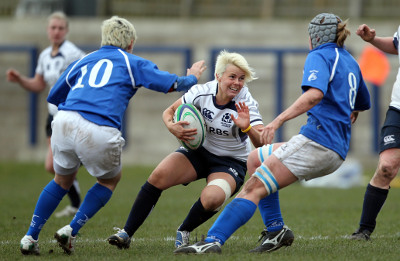 The win, coupled with a victory over Wales earlier in the tournament, is a huge boost to the Italians, who last year failed to qualify for the World Cup.

Scotland finished with the Wooden Spoon having lost all five games in the competitions.

Though the Italians were comfortable winners in the end, Scotland were left to rue a host of missed chances and their failure to turn chances into points were well punished by the boot of the experienced Veronica Schiavon who contributed 16 points in the game.

Penalised in their own half, the Italian full back slotted over a succession of kicks, including one from 45m to help her side to comfortable early lead.

As half time approached,Scotland captain Susie Brown, who was winning her 50th cap, was carded for a high tackl and the Italians immediately took advantage of the situation when flanker Michela Este saw the gap and charged through the defence to cross the line on the half-time whistle. Schiavon's conversion cleared the posts to put the visitors further ahead going into the break with a 16-0 lead.

Italy came flying out of the blocks in the second half with another try mere minutes in from winger Manuela Furlan.

As Scotland returned to full strength, they put more pressure the Italian defence but couldn't turn it into points. A powerful break from Lindsay Wheeler, followed by tenacious driving from prop Heather Lockhart brought the Scots close to the Italian line once again but the Italians cleared the ball to safety.

Scotland looked promising throughout but small errors meant their many opportunities were not converted in to points and Schaivon sealed the deal with her own try before the end.

Scotland Head coach Karen Findlay said: "Ithink the effort and the commitment on the back of the heavy defeat last weekend was visibe and we were still battling away right at the end.

"We need to get a lot smarter when we get into the opposition's 22 and finish off a job. We had a huge amount of territory today that we couldn't turn into points. That's the end of a hard season and we'll move on."