After their unbeaten performance in the first leg, Ireland will be aiming to wrap up the first U18 Home Nations Series which concludes this weekend in Birmingham. 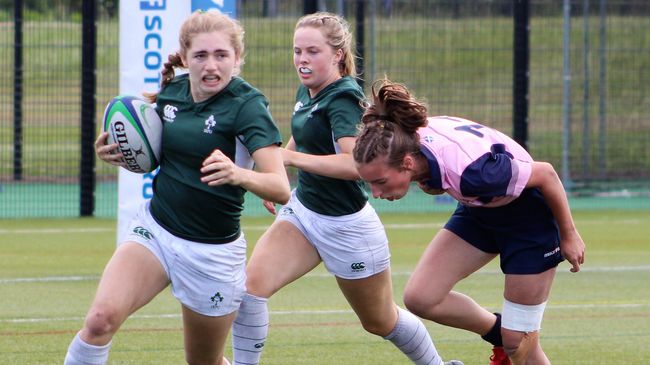 England will include three players named in the England Women U20 side to tour Canada next month feature in the squad. Amelia Harper (Loughborough Lightning), Bethany Wilcock (Trojans Rugby) and Jessica Cooksey (Winscombe) all travel to Nova Scotia for the three-match tour with Cooksey having also played in first Home Nations leg in Edinburgh earlier this month (7-8 July), where England finished runners up to Ireland.

Roisin McBrien (Worcester Valkyries), Flo Robinson (Pullborough) and Emma Sing (Hartpury College) all make their debuts this weekend, while Shauna Bennett is also named, having recently made her senior sevens debut when she played in the Rugby Europe Women’s Sevens Grand Prix Series in Marcoussis.

Team coach James Cooper said: “It’s really exciting to be able to have a mix of new and more experienced players coming together for the second leg of the Home Nations U18 Sevens. It gives the players a chance to experience international rugby and hopefully progress up the pathway into U20s and senior honours.”

For Wales Scarlets' Ellie Morgan, who was part of the UK School Games silver-winning team last year, and Cardiff Blues' Rosie Batchelor have been added to the squad which came third in the first round in Edinburgh recently.

The Scotland squad will be targeting an improved finish in England after a strong start in the opening tournament at home in Edinburgh.

A core of nine players that competed in the first leg are reselected while Eilidh Shearer, Lorna Farquhar and India Birrell join the squad of 12. Scotland’s top try-scorer from the first leg, Evie Wills, and kicker, Meryl Smith, are not available for selection for this weekend.

Scotland Coach, Graeme Blackhall, said: “I'm very pleased with how far the tea has developed and the second leg this weekend will pose different challenges for the squad. Three new players will get the opportunity to represent their country, which is credit to the hard work they put in from the beginning of the programme.”

Details about the Irish have yet to be announced