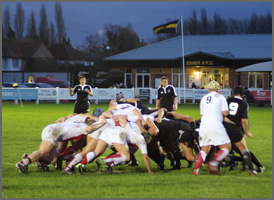 New Zealand have extended their record breaking 24 match unbeaten run with a victory over England. In strong winds, the Kiwis remained composed, making the best of the favourable wind in the first half, and failing to be affected by it when they switched ends.

England made a late change to the starting line up with Claire Allen replacing Emily Scarrett in the centres. In a late tactical change, Scarrett was moved to the bench with the more experienced Allen getting the starting berth nod.

The lone stand at Esher wasnt quite full, but the Kiwi girls certainly got the crowd excited as their customary Haka slowly, but deliberately marched its way towards the English team. With arms tightly wrapped around each other, the England squad came to meet the approaching Haka to give an exciting start to proceedings.

New Zealand kicked off the first half with a good deep kick that would come to characterise much of how they played kicking deep and accurately into the corners.

England were awarded a penalty in under a minute, but the kick to touch was dreadfully sliced and failed to even make touch. The missed touch in the poor conditions was to typify a tough day with the boot for Katy McLean.

Penalties were also to be a familiar aspect of the game. Arguably the referee was a touch too whistle happy, but with captains being spoken to after just 8 minutes, the teams cant claim they werent warned.

The opening minutes were high paced, with England looking direct and strong, but it was New Zealand who were to take control of the game. With England defending narrowly, New Zealand used their wind advantage to kick to the space in the corners and pin England inside their own half. They were playing with their heads up, looking for and finding the spaces and holes.

With 30 minute of the game gone, New Zealand were awarded another penalty in their half when Maggie Alphonsie, returning after 7 months out through injury, was penalised for crossing. Mahony converted the penalty taking them 6 points ahead.

After 34 minutes England are awarded a penalty for an infringement in the ruck, which saw Justine Lavea of New Zealand sin binned. New Zealand were once again called to talk to the referee after he deemed a tackle on Englands Becky Essex to be dangerous. It appeared more clumsy than malicious, but on 40 minutes New Zealands Casey Robertson was sent to the sin bin for a cooling off period leaving just 13 players on the pitch for the visiting team.

Arguably this was a period where England may have lost the game by failing to take advantage of the numerical advantage. In fact, on the verge of half time it was New Zealand who scored. New Zealand worked a clever line out on the England 5 metre line, attacking down the 5 metre channel. England defended the first surge, but the ball was quickly released to New Zealands Amiria Rule, composed and threatening at inside centre throughout the game, who scored near the posts. Mahony converted to make the score 0-13 at half time.

The second half saw Lavea return to the pitch. After just 7 minutes and still a man up, England leaked more points after being penalised for coming in from the side. Mahony was successful once again, taking the score to 0-16.

With the switch of ends, it was expected that New Zealand would struggle against the wind, but the New Zealand fly half continued to find touch or space with her kicks when needed.

Englands kicks to touch continued to be a weakness, but with the aid of the wind McLean was able to find some space behind the Kiwis. On one such occasion Full Back Kelly Brazier attempted a speculative grubber kick which bounced off the England defence. The resulting England attack lead to a penalty, which Spencer optimistically opted to kick, but failed to convert.

The resulting 22 drop out from New Zealand also lead to an England penalty, this time in a much better position and so after 60 minutes England got their first points on the board taking the score to 3-16.

England had one further scoring opportunity when New Zealand were penalised for being off-side at a scrum, but the kick was just wide of the left post.

England will be disappointed in their inability to make the New Zealand defence work harder, as the visitng team were able with some ease to halt their attacks. Kicking from hand and the number of line outs lost will also be a worry ahead of the second test, and both teams will look to lower their penalty count.

New Zealand will next face England A at 7pm on November 17th at Esher RFC before the second test, the Investec Double Header taking place at Twickenham Stadium at 4.45 on November 21st where entrance is free.

But before then www.scrumqueens.com will provide all of the reaction from the first test over the rest of the weekend so be sure to check back for further analysis.