Black Ferns counting down the days

With the World Cup just 100 days away, Black Fern star Vicky Heighway talks to us about how the world champions have been preparing for the Women's Rugby World Cup. The game in New Zelanad has had a chequered year but Heighway is confident her team mates can gel and build towards another title in London. The Auckland based player has already competed in two World Cups. She spoke to Ali Donnelly. Women’s rugby in New Zealand has had something of a chequered year. 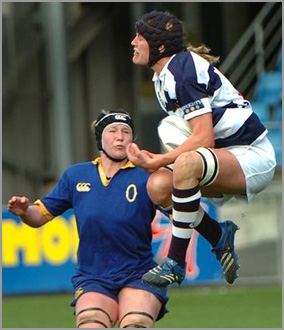 A three-game tour of England ended with a loss at Twickenham but the experience of tight games with fast turnarounds were viewed as being hugely beneficial as New Zealand returned to prepare to defend their World Cup crown.

Shortly after returning the countrys top players found out that the NPC, the main window for selection for the Black Ferns, was being cancelled by the NZRU this year for financial reasons, and then Canada were forced to pull out of their planned two-test tour in April leaving New Zealand with no build-up games before coming to London.

With all of that in the background you might expect Vicky Heighway (pictured jumping) the captain of the Black Ferns when they came to England last November to be subdued, but the lock is upbeat and says that all eyes are now looking forward to what lies ahead.

I hope like everyone else that the cancellation of the NPC this year is temporary and that we dont lose too many players because of it.

"In many ways, no NPC this year has benefited the Black Ferns as we have a lot of time together away from those games and its allowed fringe players more time to work and try and get into the squad. If the NPC had been on this year youd expect the Black Ferns squad to have been picked by now but instead weve got a larger group of players with more time to fight for players.

"The ideal think would be for us to have some games in June or July but that not being the case weve got a regional tournament for the top 100 players in the country in Hamilton then so we need to make the most of that.

Having returned to New Zealand after their tour of England where they beat England and England A and then lost to England in the final game at Twickenham rugby has been in its offseason and it is just now that the club game is back in full swing.

Weve been working individually on our own fitness and weight trainings over our summer and getting together regionally to build on that. We recently got together for a Black Ferns camp in Rotorua with 34 players and with the way our season works it was the first taste of contact a lot of us have had in a while so it was a bit of an initiation for the body to get used to again!

Looking back at the games in England, Heighway says the experience of playing games in a short period will prove beneficial in the long term.

The tour was at a tough time of the year for us coming at the end of our season but the challenge of playing three games in such a tight space of time was really great.

We know that thats what the World Cup will be like playing matches with a short turnaround is tough so the tour in England was great for players who havent experienced that to basically get used to it and understand that the days in between games are about game recovery and getting your mindset right.

England are always well drilled with strong set pieces and around the field perhaps in the last game we didnt adjust quick enough to how they were playing. They are always a huge threat and we know this World Cup will be really competitive.

Despite winning their first two games on tour relatively comfortably, New Zealand came off second best in their last game against England, a victory that will serve as a major psychological impact on the World Cups host team.

Heighway says though that it will also have a positive effect on her team.

I think mentally yeah it did affect the squad immediately afterwards and we were forced to take a step back and have a bit of reality check. In that way I think its turned out to be a positive thing because a loss allows you to reassess and move forward.

At the World Cup New Zealand are in whats considered to be the toughest pool with matches against Australia, South Africa and Wales. Should they come through unscathed then they couldnt be better prepared for a potential semi final.

For Heighway, competing in her third World Cup, winning the title after a difficult year on the domestic front would prove a major shot in the arm for the sport in New Zealand.

We are under pressure here from lots of other sports like netball, cricket and soccer which are all growing in popularity so winning the World Cup would be a boost for us as we hope it would allow us to work with the NZRU and look at how to get more girls into the game on the back of it.

For Heighway, whose squad selection looks garaunteed, her third World Cup could also be her most special if she is asked to carry on the captaincy role which she took on in England after injury to Melissa Ruscoe.

It was an honour captaining the squad and for sure I would dearly love to do it again but Melissa is also a great leader so well see what happens. Whats good is that the squad is full of leaders and we all want to win the World Cup.

Dont bet against Heighway and co to do just that.