Black Ferns put England A to the sword 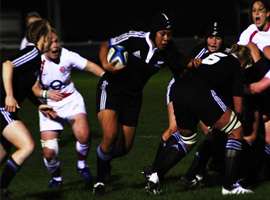 New Zealand have inflicted a heavy defeat on England A with a 48-3 victory in Esher.

The Black Ferns scored seven tries in a game which highlighted their attacking prowess as England A could do little to stem the scoring onslaught. New Zealand's pace out wide and their ability to put width on the ball quickly was the telling difference between the sides as England A struggled to make an impact when they had possession.

The Black Ferns got off to a flying start, blitzing England at the first ruck and from a solid scrum inside their opponents half a neat backrow move put Kendra Cocksedge clear down the right and the scrumhalf glided through the space for a try after just three minutes.

The kick from Anika Tiplady gave the New Zealanders an early 7-0 lead.

That early passage of attack however seemed to spring England into action and they were back on the score-sheet shortly after with scrumhalf Toya Mason who was impressive early on - kicking three points to reduce the gap. Englands skipper Sonia Green did well in those early exchanges as her side took the game to the world champions up front and in the physical stakes the home team were competing well.

New Zealand however always looked a threat out wide with the likes of centre Renee Wickcliffe and winger Carla Hohepa proving a real handful with ball in hand .

However while England competed well for the first 20 minutes, for the rest of the half it was one-way traffic and when New Zealand finally got it right out wide they made scoring look simple as they grabbed two more scores before the break.

The first came from a simple lineout win that moved play wide quickly and a well timed pass from skipper Amiria Rule to Carla Hohepa saw the winger slide over the line with ease.

Hopeha then got her second try just before break after a deft inside pass, again from Rule had put Olivia Coady on the charge and when the ball was moved wide quickly Rule was on hand again to put Hopeha over. Tiplady knocked over a good convertion and New Zealand grew in confidence as the half finished.

After the break England A were again forced immediately into a rushed defence as New Zealand came out firing and pushed deep into their half and after a few bursts, prop Beth Mallard drove over for a try which took the score 24-3 and a chance at a comeback looked lost for the home side.

New Zealand were reduced to 14 shortly after when Cocksedge was binned for a needless stamp on flanker Marlie Packer who was then forced to leave the field through injury but it made little difference on the field as the world champions continued to dominate.

England played well in patches and were competing with the Black Ferns up front, but when New Zealand threw it wide quickly they were too often out paced and crucially out-thought as the scores kept coming.

The try of the game came on the hour mark as New Zealand confidently moved the ball from left to right and the ever impressive Wickcliffe took the ball past a number of England defenders before it was shipped wide to Tiplady whose tidy switch confused the defence in front of her and gave her enough time to slip a try scoring pass to the charging Huriana Manuel.

The score was indicative of how New Zealand were trying to play as they were not afraid to throw long cut out passes and get their wide players involved in almost every attack. It helped that players like Wickcliffe, Tiplady and Rule played smart rugby, making ground and offloading to the speedsters when they needed to which allowed them to take their scores well.

New Zealand were also impressive at the breakdown as the likes of Amanda Murphy and Linda Itunu made some hard yards with the rest of the pack giving England short shrift on the deck.With Tiplady also kicking superbly from the ground, there was no let up on the scoreboard and New Zealand rounded the game off with further tries from Brazier and Tiplady who scored 18 points on the night.

The result will be tough to take for England A but New Zealand were far too good at spotting space and moving the ball away from contact quickly. While Green, Mason and Packer did best for England, overall they were outclassed in most areas.

However it's important to note that while this was very much a second-string England side, this was not a New Zealand A team. Having travelled with just 26 players, Black Ferns coach Brian Evans was always going to have juggle his squad around carefully, and while a number of the players on show tonight won't feature in Twickenham, all but four will be in the match squad.

Substitutions: Layland for Poore, Rozario for Mason, Chamberlain for Matthews (all 46), Noel Smith for Packer (53), Anastasi for Binstead, Male for Lewinska, Hunt for Staniford (all 73)