Current Women’s Rugby World Champions New Zealand have named their squad to tour England in November. Black Ferns coach Brian Evans has named five uncapped players in his squad who will travel on a rare international tour as part of their build-up to the defence of their Women's Rugby World Cup crown in 2010. 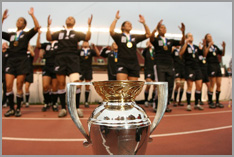 Evans and assistant coach Grant Hansen named Auckland's Renee Wickcliffe, Canterbury's Amanda Murphy and Barbara Chittock, Wellington's Claire Rowat and Otago's Kelly Brazier in the line-up as the new faces in the squad, which features 20 players who were part of the NPC final over the weekend which saw Auckland defeat Canterbury 24-20.

Evans said: The great thing about this Black Ferns squad to tour England is there's a solid foundation of experienced players as well as an injection of new talent into the mix. These new players earned their jerseys through impressive provincial campaigns and that's a very encouraging sign as we set our sights on next year's World Cup.

The squad also features six players who were part of the New Zealand squad beaten 15-10 in sudden death extra time by Australia in the inaugural Women's Rugby World Cup Sevens final in Dubai earlier this year, among them Carla Hohepa, the tournament's leading try scorer with nine.

The Black Ferns have a training camp in Auckland from 6-9 November before the tour which will feature a game against England at Twickenham directly after the All Blacks have faced England's men.