If anyone needed proof for how quickly women's intenational sevens is changing and developing then they need look no further than the arms race of tactical plans and counter-plans. The strategy that brought New Zealand a World Cup and World Series double nine months ago is already old hat. 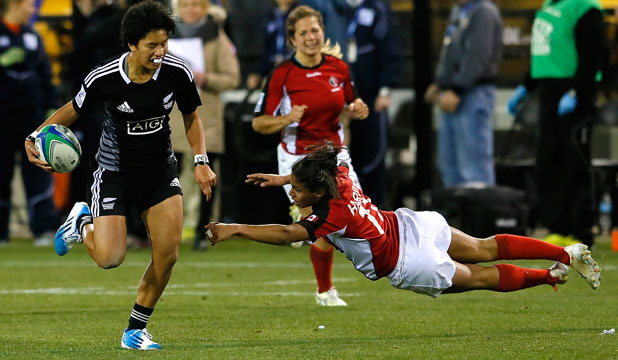 One of the factors behind the Black Ferns' success in 2012/13 were tactical innovations that aimed to shut down opposing teams by restricting how often their flair players got the ball.

"Swarming defence" ensured that whenever opposing teams had the ball they found it very difficult to get ball wide and into space. A fine example was their game against the Netherlands in Amsterdam, where the Dutch had most of the possession but found it almost impossible to advance down the field when players in possession constantly found themselves with little or no room to run or pass.

The trouble is that the other leading teams in the WSWS have quickly adopted the same tactics, with Australia in particular using the strategy against New Zealand in Sao Paulo. As a result New Zealand struggled to get the ball wide to their key players, and Australia in turn won the final.

That experience has taken Black Ferns back to the drawing board, with assistant coach Alan Bunting revealing in to New Zealand website Rugby Heaven today that they have plans to counter this at this weekend's fourth round of the WSWS in China.

''We're just changing our point of contact, and rather than using set piece as our platform, we're working a few new systems to try and get back that space. We brought in our defence back in the World Cup where we actually shut down other teams, and it's taken a while for them to actually do it.

''All the other teams realise that their only chance to really make it hard for us is to take our space away before we've even got the ball. Now it's about us adapting, and rather than trying to score tries we've got to get that space back and then go forward.''

Changing those attacking systems relies on a high skill level, and an ability to perform under pressure, but Bunting said that the Ferns have been working on their passing under pressure and improving the quality of their first attack at the opposing defensive line.

However, the weather could be a factor that could change everyone's plans. As last year, high humidity and heavy rain is forecast for both days - though this year the lightning storms at least should hold off until Monday.

''We don't really get those conditions in New Zealand, so we're working on playing in slippery conditions,'' Bunting said, ''It takes a bit of getting used to, but the girls are doing really well. The preparation has been really good so far.''