Aylesford Bulls won the English Women’s Premiership for the first time with a 17-8 win over Bristol in the final at Sixways Stadium adding the title to the National Cup crown they won in recent weeks; while in Ireland UL-Bohemians also claimed a double, adding the Cup to their league title. 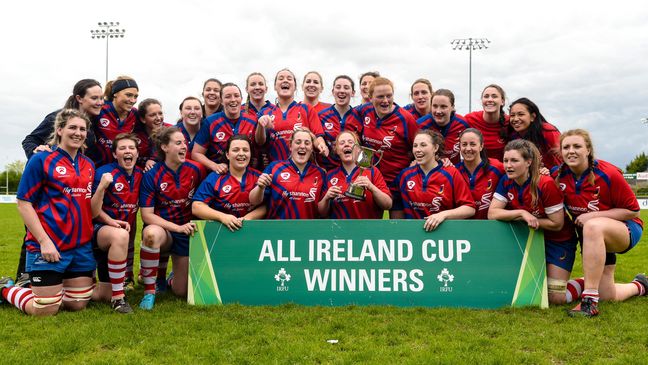 Italy's Michela Sillari scored two tries for the Bulls and Hannah Field also went over as they won the title despite finishing third in the regular season table.

Bristol made a spirited fightback in the second half with Chantelle Miell scoring her 13thleague try of the season.

Aylesford took the lead in the third minute following a break from Leanne Riley who offloaded to Hannah Field to run under the sticks, Jess Wooden adding the extras.

Amber Reed replied for Bristol with a penalty but the Bulls scored their second try in the 19th minute when Sillari went over out wide.

The match then entered a period where both sides cancelled each other out with some superb defence and the score remained 12-3 at the break.

Bristol got themselves back in the game 14 minutes after half-time with Miell flying over in the corner.

However, soon after having a try disallowed for a forward pass, Sillari scored her second from an overlap to pull away from Bristol.

Sillari even had another try disallowed for a forward pass five minutes from time but Aylesford Bulls held on to complete the double having won the Women's Cup earlier in April.

'This means everything to everyone'

Aylesford Bulls and England centre Rachael Burford paid tribute to all the players and staff at the club for winning their first ever league title.

"This means everything to everyone, not just all the players but all of the staff involved with Aylesford Bulls," Burford said.

"It's down to us as the players to repay everyone and make sure we come away with these wins.

"It's a credit to everyone at this club for all the hard work on and off the pitch."

Lichfield claimed third place in the Women's Premiership with a 41-12 win over Saracens at Sixways Stadium on play-off finals day.

Lotte Clapp and Bryony Cleall scored tries for Saracens as they must settle for fourth place in the table.

Lichfield took the lead in the 16th minute when Braund crashed over, but after Scarratt extended their lead with a straightforward penalty Sarries responded in the 25th minute through Clapp after Lauren Cattell beat several defenders.

Braund scored her second try on the stroke of half-time to take the score to 15-7 and Lichfield continued their momentum in the second period with two early tries for Boner and Williams who dived over out wide.

Jones and Cokayne, with her 12th league try of the season, both dotted down.

Winger Liz Burke opened the scoring, dashing down the flank after 14 minutes for UL Bohs' first try of the game which was converted by place-kicker Edel Murphy for a 7-0 lead.

Five minutes later, Sarah Hartigan crashed in under the posts for the second try, and again the reliable Murphy was unerring with the conversion.

Blackrock hit back through their breakthrough star of the season, Eimear Corri, the Portlaoise teenager engaging turbo speed down the right wing after a good passing movement among the backs to give the Dubliners five hard-earned points.

The scores remained static for the remaining 15 minutes of the first half but UL Bohs extended their lead three minutes after the restart when Chloe Pearse, playing at number 8, was in possession of the ball when the pack rumbled over the line. Again Murphy, who also stars as the Kerry Ladies Gaelic football goalkeeper added the two points to stretch the lead to 16 points.

It did not last long, however, as Carmela Morey responded with Blackrock's second try of the game on 50 minutes. Good play from both teams kept the supporters entertained and Burke grabbed her second try - and UL's fourth - when crossing the whitewash in the 63rd minute to make it 26-10 to the league champions.

Blackrock refused to give in and continued to scrap hard for scores with Niamh Griffin putting her name to their third try, which was converted by Michelle Claffey. However, time ran out on 'Rock's comeback and it was Bohemians who tasted the victory champagne at the final whistle - for the third time this season.

"It was a good, open game of rugby between two strong teams," remarked UL Bohs' John Keane. "It is great to end the season like this, winning all three competitions and losing just one match during the entire season."

Blackrock too had positives to take from this afternoon's performance after a season which as thrown into turmoil halfway through by a complete change of coaching personnel at Christmas.

"UL Bohs played a smart game and their set piece was very good which they were able to utilise in terms of territory and playing the game in our half of the field. They ran hard and took advantage of some soft tackling."