After taking the decision to sit out the 2017 World Cup, South Africa will return to world stage in 2021 as the first ever official African Champions. Kenya will have another chance in next year's Repecharge, and Madagascar completed their first experience of test rugby with an exciting 15-15 draw with Uganda. 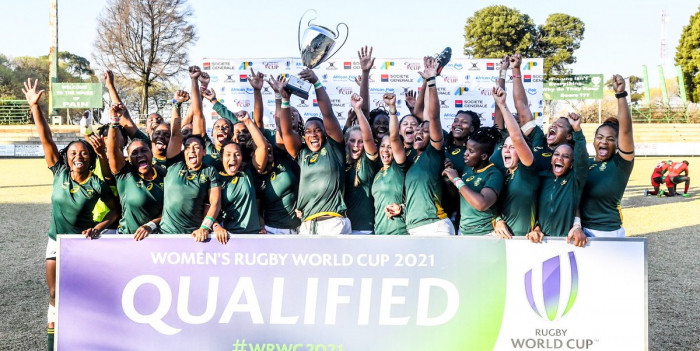 Springbok coach Stanley Raubenheimer was delighted on Saturday as his charges booked their place in the 2021 Women’s Rugby World Cup in New Zealand with a 39-0 victory against Kenya in the deciding match of the qualifiers in Brakpan.

The win marked a clean sweep for South Africa in the competition and wrapped up a full-house of points from their three matches following 89-5 and 73-0 victories against Uganda and Madagascar earlier in the tournament.

However, it was by far the closest game South Africa have played against other African opposition, and an impressive performance by the Lionesses who only brought their fifteens team out of cold storage only a few months before the game. Given more opportunities to play, Kenya – who have never had a chance to play a test match outside Africa – must close the gap.

As it is, Kenya’s World Cup story is not over as their performance in this tournament has won them the right to a place in next year’s “repecharge” where they will face teams from Europe, Asia and South America.

Today the ‘Boks took control early on, which saw them earn their fourth try early in the second quarter and take a 24-0 lead at the break, and after the initial shock Kenya rallied and held South Africa for much of the rest of the game until the home team they added three more tries late in the second half to end with a 39-0 win.

“I am very pleased for the players, they worked very hard to achieve this. They put in a great effort and they deserve this achievement,” a delighted Raubenheimer said after the match.

He was pleased with the quality of his team’s performance throughout the qualifiers, but he said there was room for improvement as they prepare to face Spain once and Scotland twice in Port Elizabeth and Cape Town respectively in September and October.

“We scored a number of tries in our three matches in this tournament, so we are on the right track in that regard,” said Raubenheimer.

“But I think we can improve on our accuracy on attack, and I also think we need to work on our defence and kicking game. The good thing is that we will be able to work on those areas in the next few matches.”

Raubenheimer drew comfort from the fact that he had close to two years to prepare his team for the international showpiece down-under, and said: “It will certainly helps to qualify so well in advance. We didn’t participate in the 2017 World Cup, so we need to ensure that we reach the current world standards.

“The matches will also offer us an opportunity to experiment against quality teams, who are among the top 10 sides in Europe, and we can also try a few new things against them.”

The Springboks started the match with a bang, as centre Zintle Mpupha made a good break through the defence at pace in the fourth minute and touched down, and hooker Lindelwa Gwala added their second try minutes later thanks to some encouraging forward play.

The hosts continued to apply pressure as the match progressed thanks to their hard running on attack, and the rewards followed with Tayla Kinsey (scrumhalf) receiving a smart pass out wide with a clear tryline in front of her to score their third try.

Snenhlanhla Shozi (winger) added the bonus-point try early in the second quarter as the team moved the ball wide into space, and this pushed the Springbok Women into a confidence-boosting 24-0 lead.

Kenya fought back with intent before halftime and did well to retain possession and run hard at the home side, but they were denied any points as the Springbok’s effective defence stood firm.

Kenya stepped up the quality of their attack and defence after the break and they did well to keep the action in the middle of the field for several minutes, but the Springboks determined efforts saw Hele breakthrough for their fifth try in the third quarter to stretch their lead to 29-0.

They continued to make their presence felt in the dying minutes, with replacement scrumhalf Mathrin Simmers taking advantage of an overlap and lock Rights Mkhari forcing her way over the chalk with a minute to play for a convincing 39-0 victory.

Earlier in the day, Uganda played against Madagascar. In an evenly matched game, Uganda and Madagascar played to a 15-15 stalemate.

The Makis got off to a bright start against the Lady Cranes, but they failed to convert two penalties in the opening stages of the match. They were left to rue those two misses as Uganda opened the scoring through Julie Nandawula's try and Mary Kyoita converted the penalty to take a 7-0 lead.

However, the Makis managed to score a few minutes before half-time through Fabrina Holiniana's penalty to ensure that the first-half ended with Uganda leading 7-3.

Madagascar came out firing after the interval as they grabbed their first try through Holiniana, but Kyoita made 10-7 to Uganda with a penalty conversion.

The Makis never lost hope as they responded with a try by Patricia Ravololonirina and Holiniana scored her second penalty to make it 15-10 to Madagascar.

However, Samiya Ayikoru had other ideas as she grabbed a late try for the Lady Cranes, and ultimately the match ended in a 15-15 stalemate.

Uganda coach Edgar Lemerigar felt that his charges were selfish on the day, but he believes the Lady Cranes benefitted from competing in the competition.

“The players were selfish on three occasions today. Madagascar were quick, but we tried to stop them. We blame ourselves for this draw,” he said. “Yes, the players have benefited from this tournament. We have seen some progress in how we play. The last game ended in a draw which means we are on the right path.”

Madagascar coach Ravoavahy Lanto Nirina was pleased to see his side secure a draw in their final match and he also revealed that it was important for the Makis to compete in the international tournament.

“We made some mistakes and we were punished. It was tense throughout the match. We were under pressure in the closing stages of the match, but we held on,” he said. “It was important for us to compete in this tournament because met international teams. We have been missing that and we have benefitted from participating in the tournament.”