Boost for Hong Kong ahead of RWC qualifiers

Hong Kong won their second game in a week against the Netherlands with an 18-0 win today in Amsterdam. That follows last Tuesday’s 14-12 victory, which was the first for Hong Kong over any European opponent in test rugby. Below: The two sides get together after the game 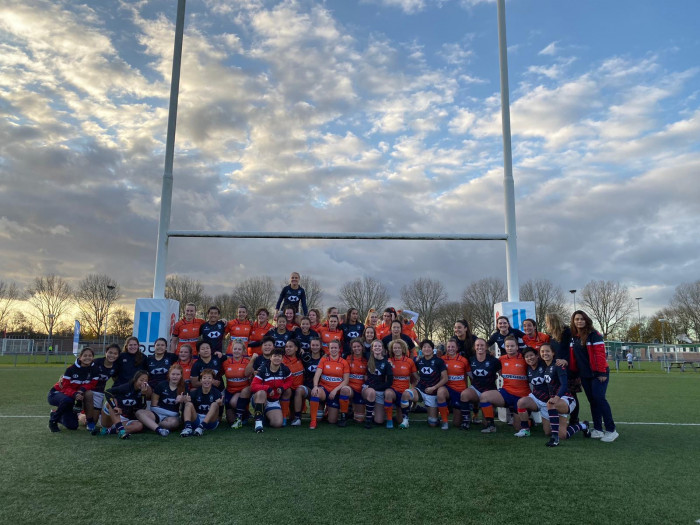 The wins will give the up and coming Asian team a real boost ahead of World Cup qualifiers next year against Japan and Kazakhstan.

Hong Kong started strongly, pressing the Netherlands from kick-off and dominating the first exchanges.  Confidence was rightfully high when fly half Lara Schats opted out of a kickable penalty to poke the ball into touch as the visitors backed themselves from the lineout.

Despite conceding height in the line, Hong Kong’s set piece functioned well and the ball was claimed neatly at the back of the line out and the forwards unleashed six phases bashing the try-line before So found the gap to burrow over after five minutes.

The visitors pressed their advantage again minutes later with another front row - Tammy Lau Nga-wun - scoring after a series of short runs from the forwards. It was Lau’s second of the series, giving Hong Kong a 10-0 advantage.

The Netherlands responded physically as the game remained deadlocked at 10-nil until the final quarter with both sides throwing everything at each other.

Hong Kong were impressive in defence, with the athletic Netherlands backline threatening to break long-range tries on several occasions only to be foiled by last gasp tackles.

Despite plenty of opportunities on both ends of the pitch, the score remained 10-all until late on.

Aileen Ryan came on at ten and her fresh legs added another wave of energy to the attack for the visiting team. Ryan soon broke open a long run through the heart of the Netherland defence to take the Hong Kong attack nearly to the line.

Plenty of forward support was there to pile in and eventually No.8 Suzanne Sittko came up with her first try for Hong Kong on her second cap, pushing the score to 15-0.   Ryan would add a penalty late to push the margin to 18, while Hong Kong maintained a clean sheet to the finish to capture a memorable series win.

Hong Kong Lead coach Fan Shun-kei was delighted with the efforts of the squad, saying, “This second win was so important to us. We just beat them in the first test, so it was a good challenge for the squad, especially with them bringing in more of their experienced players for this game.

“Our concern coming in was our physicality and the size difference between us and the teams in Europe. They are bigger than us, and that is just a fact that we have to live with.

With the series in the bag, the true results will only be seen next spring in the Asian qualifier for the Rugby World Cup and Fan believes this tour has them off to a good start.

“The girls proved something to themselves on tour, that even though we give up size, we can still play big.

‘This experience is an important moment in our build-up to qualify for the Rugby World Cup, which is what we are focused on now. This win will give us a lot of confidence going into the qualifiers with Japan and Kazakhstan.”

Fan expects the squad to push on to the next level now, warning them that there is still much work to do before facing Asia’s best in March.

“We need the same physicality we had today, more even, but we need to be much more skilful. The Asian sides are much faster and we will need to play differently against them,” said Fan.