Kelly Brazier was a standout player for New Zealand in the last leg of the Women's Sevens World Series in China. She's back in action this weekend in Amsterdam and takes on our Q&A. 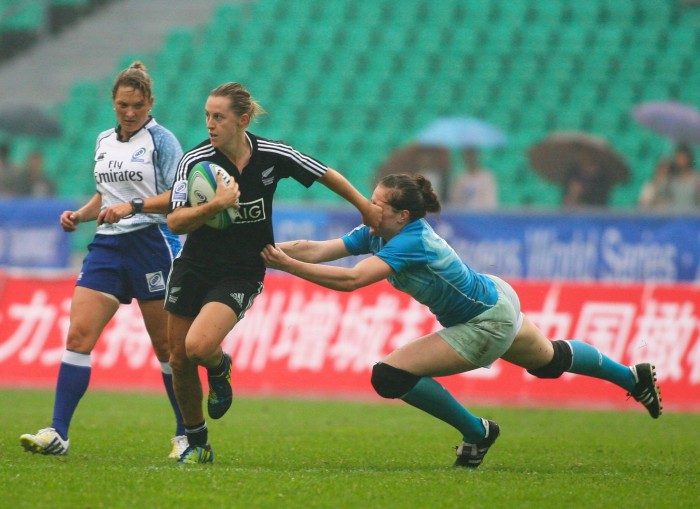 How are the squad feeling ahead of Amsterdam knowing you just need a semi-final spot to win the World Series?
We are all excited about the opportunities ahead of us but personally I`m not thinking about winning the World Series, but winning the Tournament itself first. I guess deep down I know we have to think like winners! If we enjoy ourselves (as we do) the outcome will take care of itself.

How important would it be for the squad to win the Series going into the World Cup?
I think it would be a huge confidence booster for us going into the RWC7s and the opportunity for the New Zealand rugby public to get excited about women’s rugby. We know our game is enjoyable to watch and we have some great talent in the team.

Given how new it is, tell us what the experience of being involved in the first World Sevens Series has been?
It has been extremely positive and it’s pretty special to be involved in a game that is going to be part of New Zealand’s Olympics dream. It is different to 15s and everything about it has been brilliant so far – the learnings and the busy schedules are just exciting!  Being involved in a competition that is evolving has been special and just keeps getting more and more interesting for all of us.

What have been the highlights?
Winning the China tournament and being involved in a consistently high level of rugby. I do enjoy the high standards and the competitive environment within the team.

Would you like to see it expanded next season?
It would be ideal for us to send teams to the invitational tournaments and getting ourselves involved in more game time opportunities – but those decisions aren’t up to us, and I’m just grateful to have been part of the ride so far.

Who do you see as key threats in terms of other sides going into Amsterdam and the World Cup?
England and Canada, but then any team can get up for a World Cup tournament, so they’re all threats.  We have to be ready for Russia as they are a good side and they have a huge home advantage.  We treat every camp as a trial, and we treat every game like our final!

Will you switch your focus back to 15s when the World cup is over?
I would love to be part of the Black Ferns squad to play against England in July, but right now, all my focus is on Sevens and Amsterdam.  If I`m free to explore both forms of the game then I`m keen – but this Series, this tournament come first, then the RWC7s.