It was a weekend of surprise results at the South American Championship, but Brazil were still crowned champions - for the 18th time. 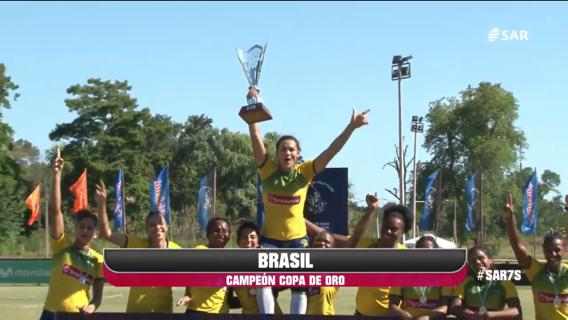 Beatriz "Baby" Futuro Muhlbauer lifts the trophy after her final game. She had been in the Brazilian national team since the first tounament in 2004

Brazil are again the South American Sevens champions – as they have been at every championship that they have taken part in since 2004. While the identity of the champion may have been not unexpected, it was the performances of some of the other participants that stood out.

Chile and Paraguay have rarely finished in the top four of previous competitions, but on Day 1 Chile were unbeaten in Pool B, including a first-ever win over Argentina and a draw with Colombia, who had beaten them on every previous meeting apart from one back in 2011, which was also a draw.

Paraguay also had a good first day, finishing runners-up in Pool A, losing only to Brazil.

On day 2 Chile were unable to match their day 1 success, losing their quarter-final with Uruguay by a single point, but Paraguay beat Argentina (for the first time in 22 attempts) before beating Colombia in the semi-finals, something they had only ever done once before, thus reaching their first ever final.

Brazil had meanwhile sailed through the tournament. They conceded a try to Peru in the first day pool, but other than that had been faultless, scoring at least five tries in every game.

Having beaten Paraguay 36-0 on the first day, and all but repeated that in the final, leading 34-0 until Paraguay managed to score at the end, Brazil eventually winning 34-5.