Brazil – newly promoted back to the World Series - extended their 12-year undefeated record in South America by winning a special sevens even organised to run alongside the South American Women’s Rugby Forum in Asunción, Paraguay, this weekend. 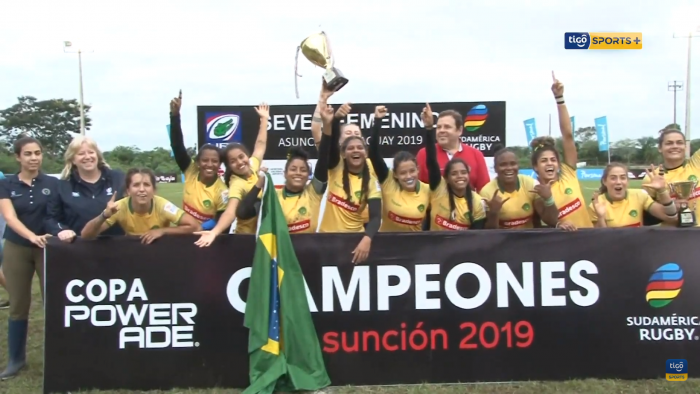 This was not a continental championship, so it was an opportunity for the teams taking part to experiment a little, but the tournament still carried some prestige with Sudamerican Rugby stating that they planned to run more such events to allow the continent’s teams to develop more and offer more of a challenge to teams from the rest of the world.

The nine teams were drawn in three pools at the start, with the pool winners and best runner-up proceeding to a “Gold Pool”, the winners of that then playing off in a final. The remaining five teams played in a “Challenge Pool” to decide 5th-9th place.

With Colombia absent the tournament was, unsurprisingly, dominated by Brazil and Argentina, each only conceding a single score to any of the other seven teams in the competition over the whole weekend.

However, there were some high points for some of the other teams. Costa Rica recorded their first win against South American opposition when they beat Venezuela in their final match, and Peru beat Chile for only the second time, though the Chileans won the other two of three games they played to finish third overall. Home team Paraguay also finished as Challenge winners, and fifth overall.

But it was Brazil who ended champions, topping Pool A and the Gold Pool with a strong 22-5 win over Argentina, and repeated that with a 22-7 win in the final. Brazil’s unbeaten run in South American now stretches to 12 years and 88 games.