Breach back to make her mark

As the Women’s Six Nations draws ever closer, Lucy Lomax  speaks to England winger Jess Breach about her return to the 15s game, playing for Harlequins and what it’s like to live out her dream of being a professional rugby player. 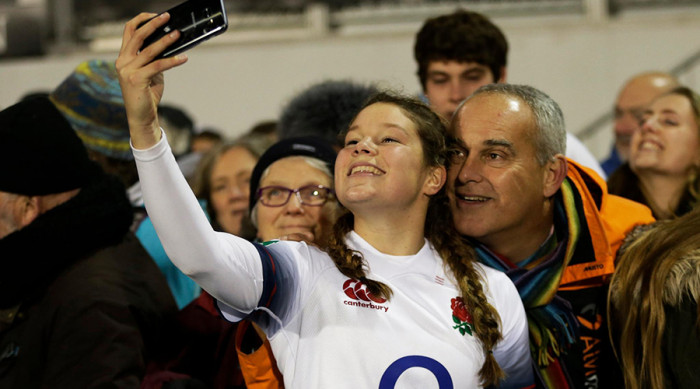 In a relatively short space of time, Jess Breach has become somewhat of a household name in women's rugby.

Not only did she score six tries on her international 15s debut against Canada in 2017’s autumn series, but she has continued to achieve, firstly by being offered a professional sevens contract back in September (winning a Commonwealth Games bronze medal in April 2018) and now the 21-year-old has made the switch from sevens to sign a professional 15s contract along with England veterans Emily Scarratt and Natasha (Mo) Hunt.

“It was nice to have Scaz (Emily) and Mo switch back over at the same time as me, it really helped with the change.” she said.

“It was a really tough decision to leave the sevens programme. Who doesn’t love travelling the world with their teammates and playing in some great tournaments? But in the end, I weighed up the pros and cons and it was the right decision for me.”

Part of the reason for the the pacey winger to switch, was the pull of England Rugby’s professional contracts entering the sport for the first time, and perhaps the knowledge Harlequins, her club, were waiting with open arms.

“It’s been challenging but fun to come back to club rugby. What’s helped is that there’s been a few hard games especially against Saracens and losing makes you want to succeed more.”

Quins lost at the death two weeks ago at Allianz Park after being 16 points ahead heading into the final five minutes.

“A lot of hard work has come out of the Sarries defeat and we righted a lot of wrongs at the weekend against Richmond," - a  match was that watched by 1,249 people at the Twickenham Stoop with Breach scoring a hat-trick of tries in the process.

With only three regular season games left in this season’s Premier 15s, Quins are guaranteed a play-off spot but there’s still plenty to play for to secure a home semi-final.

“We are building into Wasps this week which will be a big game especially as they’re so strong at home and then we have an eight week break from the league for the Six Nations and then two more games to guarantee a home semi- so we’re just training hard, getting the basics right and knuckling down.”

Switching between club and country for camps and matches is no new feat for England’s elite players and Jess explains how it works with the 15s contracts now in place: “We have camps at Bisham Abbey National Sports Centre from Monday until Wednesday and then it tends to taper down as we return to our clubs to train on Thursday and then we play at the weekends.”

With a mix of ages and experience in the England squad and with Jess being one of the younger ones, I ask who her role model is in the team. “It was Nolli (Danielle Waterman) before she retired and now it’s probably Burf (Rachael Burford) as I’m with her quite a lot at Quins and although we’re not the same position, she’s got a wealth of knowledge to draw on, her pass is outstanding and it’s just good to have her to call on at both club and country level.”

I finish off the chat, inevitably asking about how it feels to be a contracted player and a full-time professional.

“It’s phenomenal, I feel so privileged. The first few days in camp after the squad was announced was like the first day in a new year at school. Some players are still trying to find their feet a little bit with the extra free time they have!

“Obviously most of players, except the ones like myself who came from the sevens programme, have always had to fit training and gym around their day job, fitting it in in the early mornings or evenings and now they obviously don’t have to do that, so it’s a bit of an adjustment period.

“The fact that the contracts have arrived is not just great for us as players, but for young girls to look up to us and aspire to be a professional rugby player- they can now say to their parents and friends- I want to play rugby for England - and now it’s a genuine career route, which is fantastic.”