With significant movement of players between clubs over the summer and the return of England’s leading sevens players to the fifteens game, this year’s Women’s Premiership was always going to be fiercely competitive but the early rounds of the league have thrown up some eye raising results. 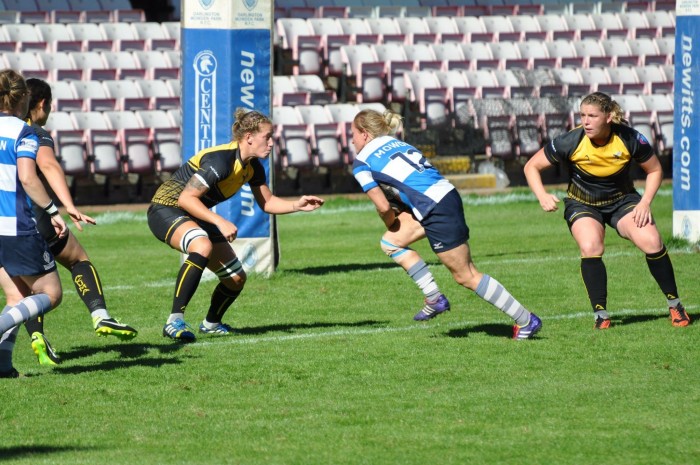 The results of the opening games means that last year’s champions Richmond are in the unfamiliar position of bottom, while Bristol, who have never won this title, sit top.

Lichfield continued an outstanding start to the new season with a hard fought victory over Saracens. Despite going behind in the seventh minute to a converted Chrissy Siczowa try, Lichfield stuck to the game plan and produced a fine display of controlled, disciplined rugby.

Lichfield scored two first half unconverted tries through England Hooker Amy Cokayne, the first coming from a well worked quick lineout and the second from a well worked break, allowing her to break through Saracens last ditch defence, leaving the home side 10-7 up at half time.

In the second half Lichfield denied Saracens time, space and quality possession and Hannah Phillips delivered the third Lichfield try after 47 minutes with a break on the right wing. Charlotte Pearce added the fourth try after 52 minutes, when she found space down the left wing with Phillips securing the bonus point for Lichfield after 60 minutes, touching down following a powerful driving maul, giving the home side a comfortable 27-7 lead.

Despite being behind, Saracens upped their intensity and began to stretch Lichfield  to the limit. Only outstanding defence from Lichfield prevented further scores from Saracens until the 67th minute when Saracens scored through fly half Zoe Harrison. Despite continual Saracens pressure, Lichfield held firm for the remainder of the game for the 27-14 win.

Saracens coach Rob Cain said: “Credit to Lichfield, they played well and deserved the win. We have a young team this year which is still learning and I was pleased with the decision making and execution during the game. Our three debutants all played well and this experience will only improve them as the season progresses. We'll now go away and regroup for another big game next week'

Bristol continued their impressive form to ease to a 42 - 3 win over Aylesford Bulls, having not conceded a try for a second successive game.

A tense first half saw both Claire Molloy and Marlie Packer break through the Bulls defence, only for ball handling errors to thwart the efforts just short of the line.

After 20 minutes, Abbie Parsons saw yellow for an offence at the breakdown, with Aylesford taking the lead through a penalty. It looked as through the score would stay this way into the half time break, however a determined Packer stormed through the Bulls back line, supported by Sarah Bern who expertly picked up the ball and dotted it over the line. Amber Reed (converted, taking the half time score to 7 – 3.

The points started off quickly for Bristol for in the second half, with Reed kicking a penalty three minutes in.

From this point Bristol took control of the territory, putting pressure on the Aylesford set piece, and patience paid off as a drive from a well-executed lineout saw Carys Phillips get the ball down – taking the score to 15 – 3.

Shortly after, Poppy Cleall slid into the corner getting her name on the score sheet and the third try of the afternoon for Bristol. As the home side grew in confidence Reed took the opportunity to kick for the corner, securing a line out 10m from the Aylesford line and Lottie Holland got the ball safely down for Bristol. Reed’s conversation attempt bounced of the post.

Packer added to her two tries from last weekend with one of her own today, and secured the five-try bonus point for Bristol. Two more tries followed, with replacement Chantelle Miell making a stunning break to score, and England captain Sarah Hunter showing her class by getting one of her own too.

Sharks welcomed Wasps to The Northern Echo Arena with the hosts making their intentions clear when No.8 Zoe Alcroft burst through the Wasps defence to open the scoring just 10 minutes into the game.  Wasps responded quickly with an opportune interception close to the Sharks 22m line - an easy run in for Wasps fly half Hannah Edwards.

Not to be outdone by the Sharks forwards, the backs sharply opened their account when winger Rebekah Wilson was unleashed by some slick handling to run in untouched in front of the Sharks support to take a 14-7 lead.

A Sharks attacking scrum in the opponent's 22m that led to the next score.  Quick ball gave Aldcroft the time and space to drive over for a 24-7 halftime lead.

Sharks came out firing and again in was Aldcroft who opening the scoring this time just 6 minutes into the half.  Wasps responded quickly with a try of their own through scrum half Sammy Wong.

The next 10 minutes saw a rise in intensity and relentless defence from Sharks and they held out several excellent attacks from Wasps.  Rebekah Wilson was released out wide and brushed off several attempted tackles from Wasps to line up an simple conversion for Sam Jamieson for the next score.

Wasps responded with an unconverted try when second row Alex Powell capitalised on a Sharks error close to their try line.  Sharks were not prepared to let Wasps have the last say and topping off an excellent performance Aldcroft made a surging run through the heart of the Wasps defence and scoring out wide on 74 minutes.  Sharks next home game will be played at Kingston Park on Saturday 8th October v Bristol (KO 11:45am) ahead of Newcastle Falcons v Bristol KO 3pm).

Worcester Valkyries sealed an impressive 31-15 victory over last season's champions Richmond Women at the Athletic Ground. It was the Valkyries' first win of the new Women's Premiership campaign as they ran in five tries to pick up a bonus-point.

Valkyries began the game on the front foot with early pressure in the Richmond 22 and were able to convert their possession and territory into points with an early try.Winger Alexia Mavroudis received the ball out wide and used her pace to race over the whitewash.

It wasn't long until the Valkyries got their second of the game, this time courtesy of lock Courtney Gill. More pressure from Worcester led to a lineout after Rochelle Clark sped down the wing. Stacey Hiscox won the resulting throw in and the driving maul forced its way over with Gill dotting down and Megan Goddard successfully converted.

The Valkyries were dominating but allowed Richmond back into the game in the latter stages of the first-half as the hosts were awarded a penalty try after Worcester gave away successive penalties just metres from the line. Ceri Large was an influential figure again throughout the game, breaking the line of play and finding gaps in the Richmond defence on several occasions.

Valkyries led 12-5 at the break but notched their third try after the interval when Large darted in under the posts and Goddard was able to add another two. Lisa Campbell enjoyed a great game in defence with some big hits that proved vital for the Valkyries during the second-half where Richmond came at them.

Pressure eventually told when Rowena Burnfield touched down to get Richmond back into the game but Rachel Lund soon put an end their hopes of a comeback when the Valkyries won a scrum on the 22 and the winger darted past everyone untouched to score in the corner – and securing her side a try bonus-point in the process.

Richmond added another score from a driving maul when Sam McCarthy managed to ground the ball under the bodies but the Valkyries would have the final say when Large broke a tackle, offloading to Steph Clark who ran in under the posts from the 22. Goddard added the extras to finish proceedings. In their next encounter, Valkyries host Bristol Rugby at Sixways following Warriors' clash with Sale Sharks on the main pitch this Saturday 24 September (kick-off 5pm).