USA women's rugby flyhalf Steph Bruce brings us the latest from her squad who are in Canada for a two test series before they head to the World Cup. 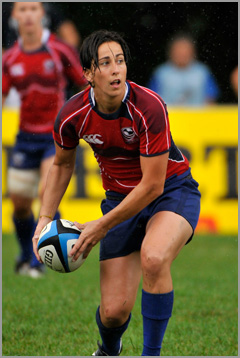 On the dawn of our first of two matches against Canada this week I'm feeling philosophical. It's hard to even put this anticipation into words. This week we play our last two tests before we take on Kazakhstan on August 20th in Surrey.

There is a lot on the line going into this game. We know what to expect from Canada, and we know it will be a hard fought match. It will be a physical battle, and the outcome of these two matches will propel our teams through the next few months of preparation.

It says a lot for North America that there are two competitive teams who can battle it out so often and be on par. But as we prepare for the World Cup, parity is not what we're looking for. Were looking for victory.

The past three days of practices have been less physically draining than any assembly I've been to so far. We are fit and have been building up to these tests through our regional select-side season.

We've been practicing our skills, doing our workouts and playing against each other. But now we're on the same side with the same goal. We're honing in on the national team game-plan, ironing out the combinations of players and moving forward.

Emotionally we're dealing with the expectation of our own play, and of each other.

We've become a family in this process, but not every player at this assembly will continue on to the World Cup with the team. Each player has a role to play, and this week is pivotal in deciding what that role will be. But it's an amazing thing to see every player chomping at the bit to represent in that jersey.

Until now the countdown to World Cup has been somewhat arbitrary; a motivational tool as we got up early to workout before our day jobs. It was a number of days so far into the future that it could always be there in the distance.

Only two months will remain at the end of this trip, and more than half of that time we will spend together as a team. This is our day job and we are professionals. And I couldnt be more excited to go to work.