Burford back just in time

England's Rachael Burford missed a big chunk of the season to injury, but she made her return just in time to to make a push for World Cup selection and will be a key figure for her side in Amsterdam this weekend. 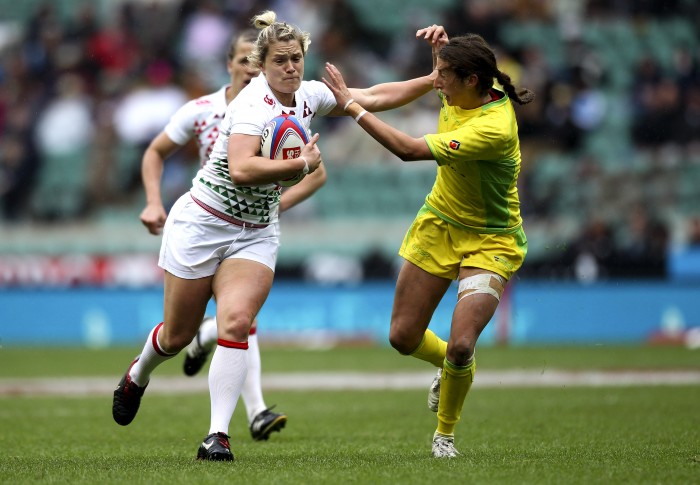 You missed a big chunk of this season through a knee injury - how are you now and how tough was it to watch from the sidelines.
It’s never easy watching from the sidelines! I did struggle to watch the Autumn internationals. The girls were fantastic and were a class act and out-performed New Zealand and it was gutting for me as a player to not of been a part of that process. I am a strong believer that  “what happens to you is only 10% and what you do about it is 90%” and having this attitude throughout my injury is what has made me come back as soon as possible and stronger and fitter than before. Having a strong support network around you massively helps. My family hugely supported me, taking me to training and physio and waiting in the car for me to finish! Without them I wouldn’t have come back on target or as strong.”

You helped England reach the final in the last leg of the series in China – what was the experience like and was it frustrating to just miss out?
“New Zealand took their chances and we didn’t. It was as simple as that. The best team on the day won the game but I still believe having watched it back that it was there for us, had we been a bit more clinical. New Zealand did really well to capitalise on our mistakes and we have learned a lot from China and have moved forward.”

What was China like – somewhere you’d go back and visit?
“Hmmm China was an experience! The culture is somewhat fascinating - how they live and the food they eat. The worst thing for the girls was not being able to connect via social media whilst being away. I can’t say I enjoyed the monsoon season, we played in some awful conditions!”

New Zealand are hot favourites to win the World Series overall this weekend – how have you rated their first season on the Sevens circuit?
“We knew enough about New Zealand from the 15s game to know they would be a great 7s outfit too, so no real surprises there that the girls would do well on the IRB Women’s World Seven Series."

There’s still a chance of course England could do it this weekend – how much of an achievement would that be?
“The beauty of Sevens is the small margin of the sport and anything can happen if we perform to our ability. We face a difficult pool on day one, playing South Africa, France and Canada so we’ve got to get through that first. It’s a great opportunity for us to play a back-to-back tournaments coming in from London and play sides we may not have played against in a while. The squad going to Amsterdam will give nothing but their best to compete for the title.”

Barry Maddocks has a fantastic 7s squad to choose from. Do you get nervous before selection?
“Yes, I think we all do and I would be surprised if any players didn’t. We are so passionate about playing for our country and being a part of something so special that no one wants to miss out. We work so hard in training and all want the opportunity to show what we can do in tournaments.”

You moved to Thurrock to play your Club rugby this season and it’s been a tough season there – is that a good example of just how competitive the Women’s Premiership is?
“Absolutely.  I previously played three seasons at Richmond and was part of a very successful winning side there so this was a new and different challenge for me. I am also prioritising Sevens this year due and playing and training closer to home allowed me more time for me to train and recover more efficiently. The Club has been very supportive towards me even during the time of my injury. It’s a great club, with some fantastic girls. Captain Mercedes Foy is a quality leader for the Club I admire how she fully puts her body on the line for her team mates.”

What advice would you give to the side just been promoted in there to stay up?
“Over the summer the girls will need to work on their fitness to be able to play at the pace the Premiership brings. The physicality will be a huge step up for Aylesford and I would also say that a focus on the set piece will be really important because being able to retain your own ball will be key.”

You’re a big Twitter user – which rugby player do you like following most and why?
“Brian Moore is a good one to follow. He is not afraid to say how he feels or what he thinks or to stand up for what is right!!”