Burford on a mission to back girls

Rachael Burford talks about her Girls Rugy Club project and the importance of encouraging leadership in women and girls rugby. 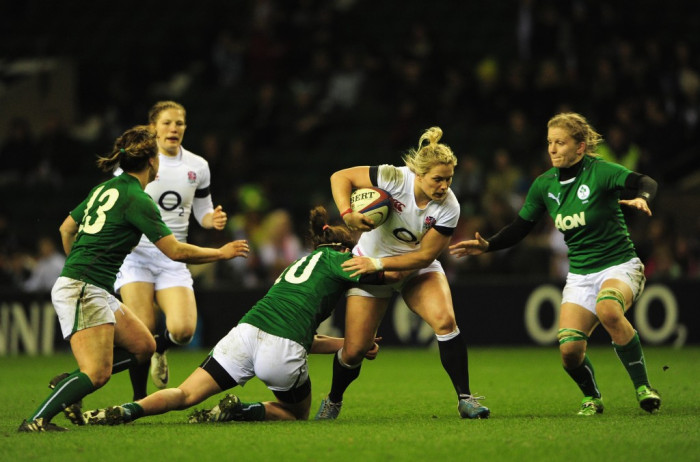 The Red Roses’ hotly-anticipated Friday friendly against France was cut short after the floodlights in Villeneuve d’Ascq suddenly shut off in the 63rd minute, prematurely ending what had been a thrilling rematch of last weekend’s Six Nations final.

Captain Sarah Hunter was quick to stress it could have happened to a team of either gender, but for many women’s rugby fans, it was—at least symbolically—another example of their game getting short shrift.

Harlequins captain Rachael Burford is on a mission to ensure the future feels more optimistic, working on the forefront to elevate the women’s game worldwide, from governance to grassroots.

And she’s starting by going straight to the source: girls.

“It’s really important for us that we don’t just set everything out as administrators or people at the top of the business,” explained the England international.

“We need to find out what’s happening on the ground.

So, as part of her global Girls Rugby Club, Burford, 34, has drafted a starting XV of young female rugby leaders from across the UK.

The first cohort, announced in April, comprises girls aged 9-18 who will act as an advisory council while also receiving mentorship, learning opportunities and a chance to connect with like-minded peers.

Burford said: “We just had a meeting now talking about what clothing impacts them, you know, not suitable for them to be wearing as girls.

“How do they want their coaches to approach them around menstrual cycles?

“We want to really understand how girls think and feel, so then we can help support and put that information out there, so that all the rugby clubs around the world who have girls’ rugby can access this information to better support their players and their club environment.

In 2019, World Rugby counted 2.7 million female players around the world, as well as a promising 28% increase in registered female players in its member unions between 2017-2018, the first year of the organisation’s women’s development action plan.

In order to meet those targets, Burford said, “we’ve got to look at schools.

“I think where there is option for boys at school at the moment there isn’t for girls. I think that’s a massive way you can help introduce new players into the game.

“[But] then what’s the relationship after that with clubs, etc. locally to recruit and retain those girls who are picking up the ball and starting?”

The Chatham native, who earned 84 caps for England, has long been an outspoken advocate for women’s rugby, and in 2016 became the first female professional player on the Rugby Players Association players’ board.

In March, she was named Head of Women’s Rugby at International Rugby Players, the sport’s global athletes’ body.

One of Burford’s first priorities, like with her young XV, is to directly solicit input from those she’s been appointed to serve.

Because, as she explained, “everyone can think they know what’s happening in Ireland or France [but]…certainly with the women’s game, it’s not one shoe fits all.”

Her advice to girls dreaming of changing the game from the top?

She said: “Being in a room, that’s one thing, but then being able to challenge is another, and talk is another.