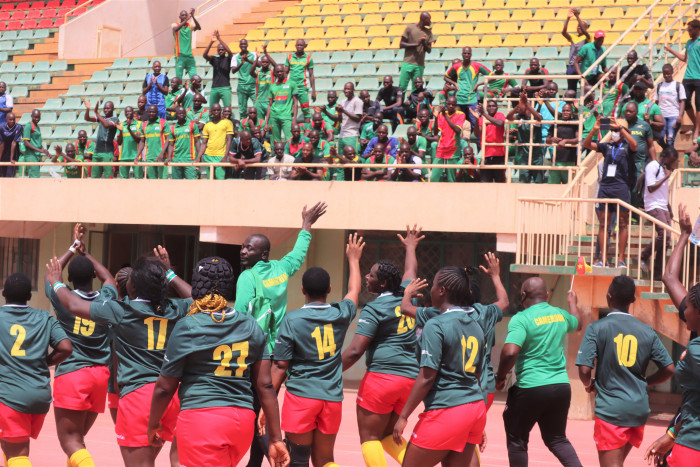 The Indomitable Lionesses of Cameroon triumphed in Ouagadougou (Burkina Faso) in their firest test match, on the morning of 9th, 2021 at the August 4 stadium, against the Stallions of Burkina Faso by the score of 37 - 0.

Scheduled for 08:00AM the test match kicked off at 09:00AM due to the rain that soaked the pitch. In the first half, the Cameroonian team showed endurance and mastery of the oval ball. After No. 8 Prisco Rosine N’Dingo opened the scoring in the second minute, the Lionesses added two more unconverted tries bringing the score to 15-0.

The in the 26th minute, Prisco Rosine N’Dingo received a yellow card for a high tackle, and the score remain unchanged to halftime.

After the 10-minute half-time, Cameroon scored four tries including a single conversion. Burkina Faso could not score any points in return.

Velhyr Dabiré, coach of the Burkina Faso women's team, admitted that the opposing team were technically more up to the task.. But her team captain, Yvette Sawadogo, remains confident in all sportiness for a victory in the second leg.

Cameroonian coach Jacques NGomsu Tchon Lahui said the score could have been higher if the Burkina Faso team were not so strong. Captain Gertrude Prombove agree that the opponent gavethem a hard time.

This is the first match since Cameroon returned to African and international rugby bodies after almost a decade of absence. This women's competition is part of Rugby Africa's plan to develop 15s competitions over the next dour years.