Cameroun have reached the finals of the Africa Women’s Cup, topping qualifying Pool D with two wins, and without conceding a point. 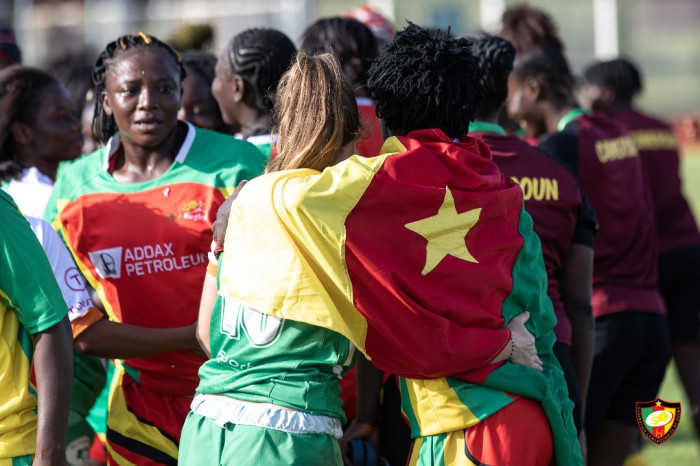 West Africa completed three weeks of Africa Cup qualifiers with a tournament in Yaoundé in Cameroun featuring three of the continent’s newest rugby nations – Cameroun, Cote d'Ivoire and Burkina Faso having only made their test debuts in 2021.

The tournament began last weekend with Cameroun v Cote d'Ivoire. This was a very tight battle, the first half ending without a score, the deadlock only being broken in the 46th minute when Cameroonian pressure finally told, a scrum in front of the Ivorian posts being worked quickly wide for a try in the corner.

The conversion was missed, but Cameroonian pressure and Ivorian inexperience resulted in a penalty after 65 minutes that put Cameroun 8-0 ahead, a lead they maintained to the end of the game.

On Tuesday Cote d'Ivoire took on Burkina Faso. The Burkinans were outclassed but a much better coached and rugby aware Ivorian team, whose forwards utterly overpowered the Burkian pack. Yet Burkina Faso held out for 16 minutes before the first score – a penalty – and another couple of minutes before the first try. Three more followed, and Cote d'Ivoire lead 29-0 at the break.

The second half continued the same way with Cote d'Ivoire dominating play across the field, but not taking full advantage of all of their opportunities, adding two more tries to lead 43-0. But Burkina Faso kept trying, and as Cote d'Ivoire tired managed to force their way over the Ivorian line. Cote d'Ivoire scored a seventh try shortly after, but Burkina Faso ended the game with perhaps the best try, winning a scrum in their own half, working the ball to the inside centre who left the Ivorian line standing with a magnificent step, followed by a 60 metre run to the line. Final score, 50-10 to Cote d'Ivoire.

It was a result that temporarily put Cote d'Ivoire on top of the pool, but also meant that Cameroun needed just a draw against Burkina Faso in the final game.

Cameroun (who, like Madagascar in an earlier round, also have a “haka”) took just three minutes to get on the board, going on to score eight first-half tries to lead 40-0 at the break. With the rain coming down heavily and some standing water on the ground, Cameroun’s scoring slowed with just two more tries in the second half for a 52-0 win.

Cameroun will join South Africa, Kenya and Madagascar in the finals next year. The top two teams will qualify for WXV.