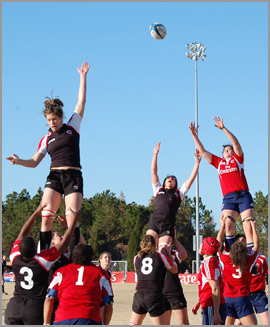 For the fifth time in just over a year, the Womens National Rugby Teams of the USA and Canada meet on Monday at Shawnigan Lake School, BC, for the first of the weeks two-test CanAm series and their final competitive preparations for the World Cup.

After the second test on Friday (at Bear Mountain, Langford, BC), the next time the these players pull on their match shirts it will be at the World Cup itself.

The amount of preparation that each team has put into this World Cup already dwarfs anything that has ever gone before.

Two Nations Cups over the past two summers, Canadas first tour to France, the Atlantic Cup between the same two nations in Florida in January, Spring training camps in New Jersey, San Francisco and Calgary (the last one an intense ten-day long session for the Canadians) and countless fundraising initiatives (for, despite all the above, this is still an amateur sport).

A major feature of the preparation by both sides has been their use of communication technology to keep supporters up-to-date (and keep the funds rolling in!). Canadas use of Facebook has been matched by the USAs We WaNT Rugby website. Both have been refreshing, innovative, funny, fascinating - leagues ahead of the rest of the world and at, presumably, little financial cost.

If there were a World Cup for imaginative online PR and promotion of the game then it would be these two nations who would be in the final. Both are models for the rest of the world please note!

Overall the first test will be the 26th time the two sides have met (USA lead 15-10), but the tale of the past four years has been one of Canada initially racing away while the USA fell to eight successive defeats, including four back-to-back losses to their rivals. That all turned at the 2009 Nations Cup when the USA finished second, while Canada were forced into a major rethink.

However, after successful Canadian tour to France, with the series drawn 1-1, Canada were back and the result in January was the two teams astonishingly well matched - an 18-10 win for Canada being overturned with an 11-10 win for the USA four days later. There seem to be no major team changes this time other than the result of Winter Olympic hero Heather Moyse for Canada. It all goes to make the coming series almost impossible to call.

And that is biggest difficulty that both teams will face and have to overcome. Familiarity. For two cash-strapped unions this is inevitable when the next nearest comparable opponent is an ocean away (though the rise of Caribbean rugby offers a chance for improvement in the future), and while the games will not lack for competitiveness, the risk is the lack of variety.

The game changes, as the remarkable rise and rise of the South African team has shown. What works against a team you know well, may be less effective against opposition you have never seen play before. The danger is that either team may prepare to just beat the other, when each should be preparing to beat the rest of the world.

What can be said is that whoever comes out ahead will hit the ground running in Guildford, while whoever finished second will have some hard work ahead.