Can the Red Roses be stopped? 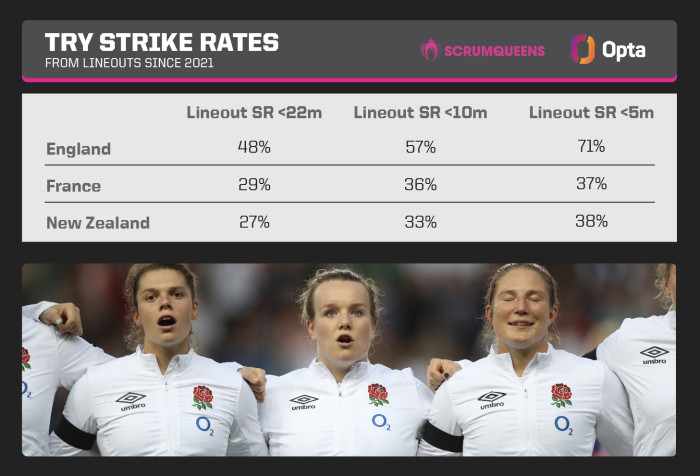 The US won the inaugural Women's Rugby World Cup in 1991, but since then all seven editions of the tournament have been won by either England (2) or New Zealand (5). In just a few days’ time the delayed 2021 Rugby World Cup will kick-off in New Zealand but for once the hosts won’t be the favourites, instead the Red Roses will be the ones expected to emerge victorious.

England have always been a force to be reckoned with, but at the moment they are the force in women’s rugby. A record run of 25 consecutive victories dating back to 2019 tells the story of their dominance and you have to go back to 2016 for their last defeat to a side that wasn’t France or New Zealand (52-17 v Canada).

In their current winning streak, England have beaten eight different teams, including France eight times and New Zealand twice. Their World Cup record is no less impressive, the only team to have beaten them in the tournament since their loss in the 1991 final to the US is the Black Ferns (5 times).

As they’ve built towards this tournament, England’s style of play has been built upon the foundations of an imposing and dominant pack paired with a powerful and creative backline. Since the start of 2021 they’ve managed a lineout success rate of 88%, significantly better than their main rivals and this has led to them scoring an average of 1.5 tries from mauls per game (France 0.2, NZ 0.1 per game). This lethal scoring rate can be seen below where they’ve scored a try from 48% of their lineouts in the opposition 22, a figure which rises to 57% when within 10m and 71% when just 5m out.

This ability to bully sides from the set piece and punish any ill-discipline by kicking to the corner and rumbling over is the perfect foil for their more elusive and flamboyant play in open field, if one option doesn’t work, the other will, relentless and merciless.

The main challengers to England’s hopes at this World Cup will be France and New Zealand, both of whom have more than enough talent in their squads to go all the way.

The Black Ferns have had a challenging few years, Covid meant they didn’t play any fixtures in 2020 and this undoubtedly played a part in them succumbing to 4/4 losses in 2021, two to England and two to France. Following that humbling European tour there has been plenty of off-field drama surrounding the camp, but in 2022 they have quietly strung together six wins on the trot, scoring 271 points and conceding just 47. A home crowd and the importance of performing on the biggest stage will no doubt give them an extra edge, especially with a few players potentially set to bow out after the tournament, definitely don’t write them off.

Les Bleues have been England’s main threat in the last few years and although they’ve lost 10 on the spin to Simon Middleton’s side, the average margin of victory in those games has been just 7.8 points, with six of those games being decided by less than a converted try. Their pool stage clash in this year’s tournament will definitely be one of the games to watch out for and will be a real marker towards their respective chances of ultimate glory.

Below we look at the three contenders and their stats across some key metrics in different facets of the game across the last couple of years. There’s no doubting England’s strength and scoring firepower but France have a strong foundation as well, beating their rivals in goalkicking, tackling and at the scrum, three elements that will be crucial come tight games in the crucial closing stages of the tournament. 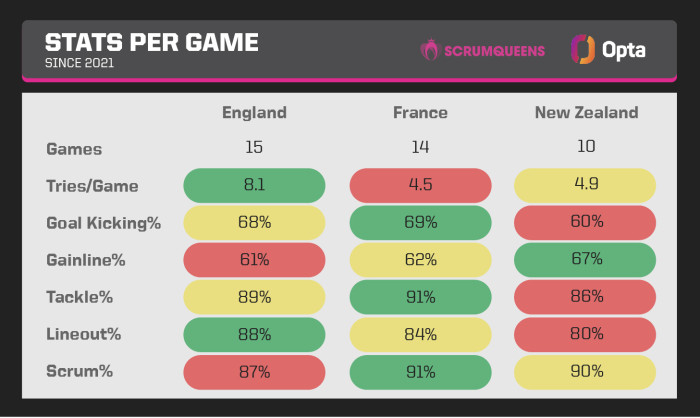