Over the past week Canada and the United States next generation gone head to head in Ottawa – and there has been just one winner, with Canada's U18s and U20s both winning their series 2-0. 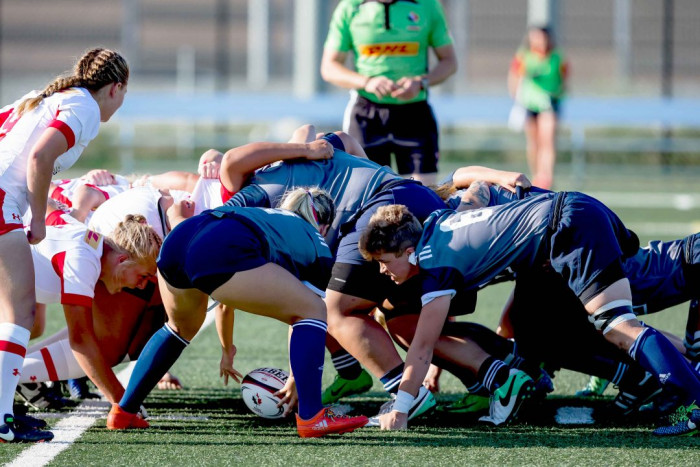 The remarkable Canadian rugby production line shows no sign of slowing after a week of international U18 and U20 rugby in Ottawa.

This was the first CanAm series at this age group – and on the second ever series, after Canada’s series in England in 2016.

Canada drew first blood after a USA forward pass in the first 10 minutes of the match. Their ability to maintain possession in the rucks caused issues for the USA all match long, but the times USA had the ball did not go unnoticed. Physicality by centres Lolohea Makaafi and Salote Tausinga opened up some opportunities for the USA to attack. Their two tries came from Elizabeth Wilson and Sacramento's Fane "Eti" Haungatau, in the first half. Flyhalf Alexandra DiMarco added the conversion performed well in the middle of the field. Twins Tiana and Tiara A'au also ensured that Canada stayed honest on defence with strong running and ruck contests of their own.

Despite this Canada built a 29-12 lead by the break through four first half tries before adding another four in the second half to secure a dominant win. Marginal errors kept the All-Americans out of the try zone in the second half, even after several attempts to touch down. Canada managed to seize the turnover opportunities presented, allowing them to pull ahead as the clock winded down.

"Overall, I was really happy with the performance we put in”, said Coach Dan Valley. “Our intention coming in was to be dominant at set-piece, confrontational at the point of contact, and aggressive with our pressure defensively, and we were successful in all three areas.”

"We played a lot of defence so it was difficult to develop a good flow on attack," said USA U18 captain Cassidy Bargell. "We created a lot of opportunities which is exciting because now we just need to focus on execution."

Canada U18 defeated USA 25-5 on Saturday evening at the University of Ottawa to capture the two-game CAN-AM Series.  Canada's tries were scored by Valerie Wydeski (x2), Taylor Black, Hunter Czeppel & Vyktoria Brochu. The USA's lone score was through Julia Riekena.

This was the second CanAm U20 series, after the two game series in 2015 at Central Washington University, which the USA won 2-0.

Canada's U20 women rolled to a 45-24 win over the USA behind a seven-try performance.

Canada's forward-driven attack and ability to maintain possession of the ball was a huge contribution to their 48-point win in the end, with tries from captain McKinley Hunt (2), Taejah Thompson, Abigail Duguid, Kassell Menin, Veronica Harrigan and Julia Schell in a dominant performance.

Canada took a 19-14 lead into the break after three first half tries while scoring four more in the second half at Gees-Gee Field.

Canada found the try zone early. USA answered back with a try of their own shortly after, a result of keeping the ball alive long enough to put Seattle Saracen's Adi Finau Tamaivena into space. Fly half Bayleigh Gable converted the try to even up the scoreboard.

It didn't take long for Canada to find their way inside USA's 22 metre line, which is where this team shone. Multiple pick and goes put Canada's No. 5 Abigail Duguid in. Another converted kick and Canada was back in the lead. USA ruck contests, something Kat Ramage and Michel Navarro showed their experience from the 2015 series in, and big hits from Captain Suiluana A'au kept possession even. U18 Emily Henrich, who had been called-up from the U18 squad, showed her ability with try of her own after a quick tap off a penalty. Both teams were able to capitalize on one another's small errors throughout the first half. With another forward's try before the half, Canada headed into the second half in favour, 19-14.

The Canadian pack brought the energy back to the second half as tries were scored by both props and two from their lock and captain McKinley Hunt. Before Hunt's second, a turnover ball was quickly moved through the USA U20’s hands in what looked like a stagnant situation, but full back and Fallbrook product Lilly Durbin came busting through a gap with a full head of steam, running 40 meters to successfully find the try zone. Canada focused on working the middle of the field while USA had success in the edges.

USA seem to have figured out Canada's strategy in the last 20 minutes of the match, and was able to adjust but it was too late for a comeback. The All-Americans did end with a dynamic team try, allowing Durbin to put BYU's Kaino Ah Quin away to dot down in the corner.

"I couldn't be prouder of the work and amount of heart our team put on the the field," said USA Vice-captain Milla Anderson. "We set a good platform to grow off of. Now we just have to focus on tightening up our game play to take advantage of when we are on attack."

Canada closed out the series with an emphatic 50-12 win over USA on Monday morning at the University of Ottawa.

Coach Jen Boyd's side ran in eight tries en route to victory, while only allowing two scores from the visiting Americans. With the win, Canada secured the series with an aggregate two-game score of 95-36.