North and South America staged their first ever U18 Championships this weekend, with a place at the Buenos Aires Youth Olympics (13-15 October) at stake. 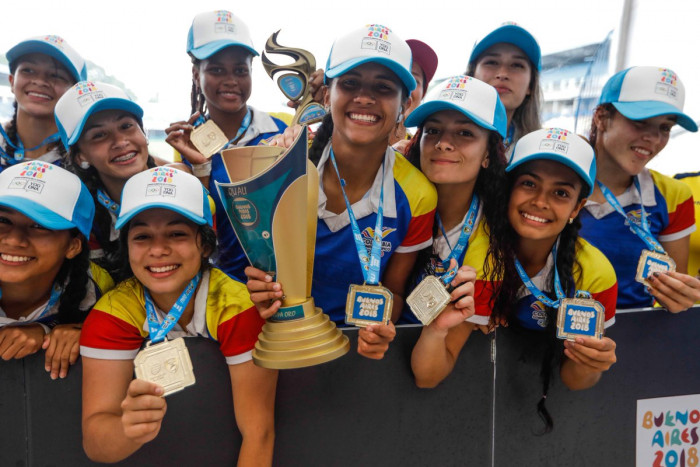 Colombia: U18 Champions of South America

The tournament was spread over three days, with the pool and semi-finals on Thursday and Friday on one of the outside pitches, and the final on Saturday in the main Sam Boyd stadium.

The tournament was – perhaps predictably – dominated by United States and Canada who reached the final without dropping a point to their central American and Caribbean opponents.

As a result, Canada, who topped the pool after beating United States 14-5 on day two, then met the hosts in the final on the third day, this time winning by a convincing 36-5

The tournament was played over two days, with three rounds of pool games on the opening day, and two rounds and the second day, with the top two teams going straight to the final.

The quality of the teams varied somewhat, with Chile in particular being outclassed, only scoring points in their game with Paraguay.

In fact, most of the pool games were remarkably one-sided with both sides scoring in only two of the ten games. The only other game that did feature points on both sides was the one between the Colombia and Brazil, where the Colombians – who had already impressed - won by 17-5.

Colombia topped the pool as a result, with Brazil comfortably in second place, Paraguay third and Argentina fourth. The latter two first played off for third, Argentina reversing their pool defeat to win 22-17.

The final between Brazil and Colombia was as close as their pool game earlier in the day, but the same result, Colombia winning this time by 10-0.

Participation in the Youth Olympics is not automatic for qualifiers. Participation in team sports is limited to one women’s and one men’s team per nation across four team sports - Football, Handball, Hockey, and Rugby. As a result, if a Colombian or Canadian (or Japanese*) team also qualifies in one of the other three team sports their NOC will have to decide which sport they enter.