Italy played their first ever test outside Europe, but lost 34-24 to Canada, playing their first home test for seven years. 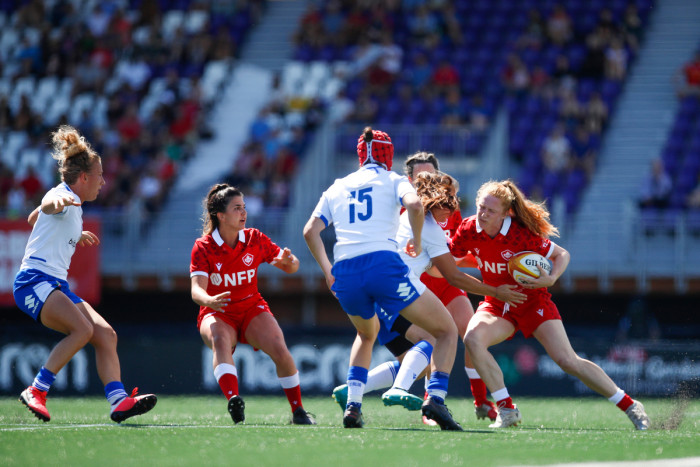 Tries from Paige Farries, Sara Kaljuvee, Emily Tuttosi and captain Sophie de Goede, as well as a series of conversions from de Goede and Brianna Miller, secured the victory for Canada in Langford.

“We are pleased with that,” coach Kevin Rouet said following the match. “But we know we let Italy come back in the game with some soft penalties and easy tries. So, it’s good lesson for us for the World Cup because it’s very manageable and fixable so we can move forward with that.”

In starting the match, DeLeaka Menin earned her 35th cap and Kaljuvee her 10th. Meanwhile, in the second half, Karen Paquin and Brittany Kassil claimed their 30th and 25th caps respectively when they entered the field as substitutes.

With both teams drawn in Pool B at the Rugby World Cup, this game provided an early taste of what to expect in New Zealand later this year. It was Canada who applied the early pressure and it paid off in the seventh minute when scrum half Miller swung the ball out to Farries from a breakdown and the winger scored unchallenged.

Against the run of play, Italy provided an immediate response as full back Vittoria Ostuni Minuzzi broke through Canada’s defence with an evasive run to collect the visitors’ opening try. However, the hosts remained on top physically and made it count when Kaljuvee went over in a carbon copy of Canada’s first try, which was followed by a successful de Goede conversion.

An emphatic defensive stand by Rouet’s side just after the half-hour mark forced a knock on by the Italians, but the away side remained on the attack and eventually reaped the rewards of sustained possession as Maria Magatti powered over the line to score their second try. Sillari missed the conversion and the teams went into half time level at 12-12.

After the break, Canada re-asserted their hold on the match with consecutive tries thanks to dominance in the pack. The first came from a lineout deep in Italy territory as de Goede collected the ball and the Canadian forwards drove over the line for Tuttosi to touch down. The second was scored by de Goede herself as the captain dove over in a close-quarters situation. Miller hit both resulting conversions to make it 26-12.

A Sara Tounesi score cut Canada’s lead to nine points in the 58th minute, but the hosts remained unrattled and extended their advantage six minutes later through Farries’ second try of the match. Canada did concede a late Elissa Giordano try from a lineout with just over five minutes to go but a successful de Goede penalty conversion two minutes before the final whistle sealed the 34-24 win for the hosts.

“It was absolutely incredible,” said Victoria native de Goede on playing and winning a match so close to her hometown. “Just being able to go into the stands after the game, give my mom and dad a hug and my brothers, aunts, uncles and friends. There’s honestly no feeling like it. I’m just still reveling in it.”

She added: “I thought Italy put up a really good fight. They had a lot of momentum in their carries, they were really feisty at the breakdown and had great skill in their backs. It took a lot for us to win that and I think what it came down to was finishing from our backs and good go-forward from our forwards at set pieces. I’m really proud of one through 23 today, and our squad that was in the camp.”

Double try-scorer Farries said: “It was pretty amazing. I’ve got a lot of friends in the crowd. I have lived in Victoria for a long time so it was really special to not only hear a bunch of Canadian voices and have the crowd on our side for once but also getting to hear specific voices – friends from university, friends from the sevens program and colleagues.”