Canada do the double

Canada have beaten the USA for the second time in a week. 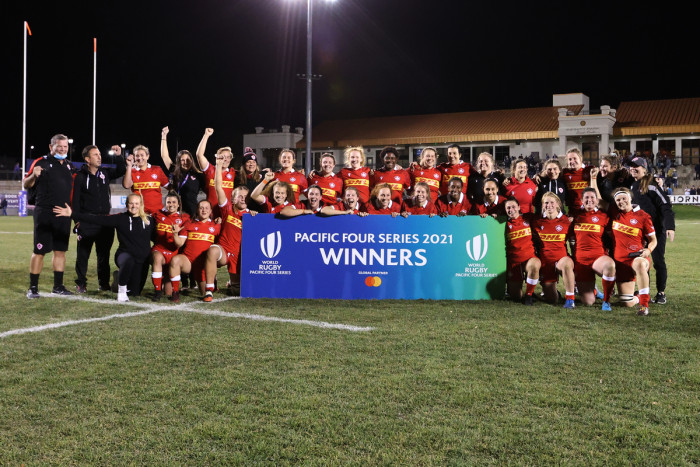 The 26-13 was enough to capture the Pacific Four Series inaugural title - with other teams joining next year.

US captain Kate Zackary opened the scoring just minutes into the game, followed by a quick response from Canada’s Sophie de Goede, who converted her own try. Teammate Courtney Holtkamp followed with a second Canada try to put her side up 12-7 before the nine-minute-mark of the opening half.

A United States penalty in the 28th minute from Gabby Cantorna cut the Canadian lead to 12-10, but the visitors answered right back once again with a try from Alex Ellis and a second conversion from de Goede.

The teams headed into the break with Canada leading 19-10.

Karen Paquin’s try with just over 10 minutes remaining in the match all but secured the game for Canada, whose defence stood tall despite being down a player for the majority of the second half following a red card - having been reduced to 14 players in the 63rd minute after lock Laetitia Royer was sent off for a second yellow card, this time for a high tackle.

Paquin’s score would mark the final points for either side, with Canada maintaining a 26-13 lead through to the final whistle.

“It’s absolutely amazing to be back with the team, we’ve spent a long time apart,” said Canada captain Laura Russell.

“We had some things to work on, we wanted to come out hard and flying and we tried to do that,” added Russell. “We’ve still got a ways to go, we’re building right now, but we definitely wanted that fire in the game and we’re proud that we gritted it out and took home the win.”

US coach Head Coach Rob Can and the entire squad were visibly disappointed and frustrated.

“We have to do the basics well under pressure,” he said. “

"We’re working really hard to put things right but at times, out on the field, it’s not showing. These are really, really harsh lessons; but lessons that we need to start getting over because if we want to do the things that the group speaks about, then our precision and our accuracy in big momentum swings have to get better.”

Both teams head to Europe this week for further Autumn tests.