Canada open U20 tri-nations with win

Canada beat the United States in the opening match of the U20 tri-nations - which also involves England - on Tuesday. Canada face England Friday evening. 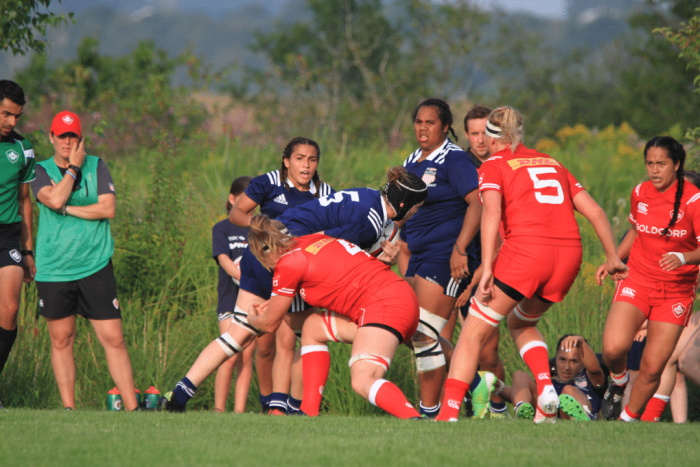 United States U20s (officially the “Junior All-Americans”) lost the first match of the U20 Women's Tri-Nations Cup 36-12 to Canada. Despite a hard-fought effort, defensive errors and problems with the set piece proved costly, allowing the Canadians to run away with a six try win at Acadia University in Nova Scotia.

The beginning of the match was tightly-contested, however, and United States put Canada under pressure early forcing knock-ons that provided the USA with opportunities which they were unable to take. The USA then suffered a costly penalty of their own soon after, giving the Canadians a lineout dangerously close to the try line that saw their side move up 5-0 through Niamh Haughey within the first 10 minutes.

Canadian mistakes continued, with tackling penalties and more knock-ons giving the USA a multitude of set pieces to capitalize on. Then, a rhythm of pick and go offloads across the USA forward pack allowed Alexandria Sedrick to dot down and tie it up, 5-5.

A penalty for not releasing gave possession back to Canada minutes later, where a lineout 10 meters from the try zone allowed Sophie de Goede to score her first of four for the opposition, 12-5. Goede followed with another try soon after, helping her side dominate the set piece action.

With the Canadians holding the better side of the 17-5 score, the United States was determined to make a showing before halftime. Finau Tamaivena made a huge break up the middle but a forward pass gave the ball right back to Canada. Another breakaway by McKenna Strong was turned over at the breakdown and the U.S. was unable to answer back before the half.

Canada's Madison Gold opened the second half with another try, bringing the score to 22-5 as tensions continued to rise. USA's Tiana A'au was sent to the sin bin shortly after, allowing the Canadians to dance away with a fourth try for Sophie Goede and a first for Tausani Levale to make it 36-5.

USA's Emily Henrich capped the high scoring affair with a try of her own, converted by Natalie Gray,  to bring the All-Americans up 36-12, but a strong defensive front from Canada halted a comeback in the remaining minutes of the game.

A big offload from Finau Tamaivena to Mata Hingano allowed Hingano to make a convincing breakaway but Canada was relentless at winning the turnover. With moments left to go, the United States took one last lineout just outside their attacking 22 but were unable to do anything with it. Time expired and the Canadians had clinched the 36-12 win in Nova Scotia.

The match is available live online via Rugby Canada with kick off at 10.30pm BST in the first of a three-game tour for England Women U20.

Bristol Ladies outside centre Phoebe Murray captains the side for the first time, having previously captained England U18 Sevens, while Harlequins fly half Ellie Green and Trojans centre Bethany Wilcock will both be looking to come off the bench for their first England game.

Red Roses’ Lagi Tuima, Abigail Dow and Zoe Harrison, who all appeared during the 2018 Six Nations and have five international caps each, lend their experience to the starting 15.

Due to injury (ankle), Tabitha Copson has been replaced in the squad by Darlington Mowden Park Sharks forward Rianna Manson, who is named on the bench.

Yapp said: “We arrived in Canada on Monday and the squad have recovered well, acclimatising to the humidity and warm temperatures.

“This is a really exciting team with a mix of experienced players alongside some talented youngsters that are stepping up from the TDG for the first time.

"We are really pleased with how the players have bonded as a squad in such a short space of time and adapted to the tour environment.

“Having watched Canada and USA play this week in the first game the players are really excited about the challenge that the next few weeks will bring and cannot wait to get out and play Canada in the first test."

Canada U20 overcame USA U20 on Tuesday, winning 36-12 with four tries from captain Sophie de Goede.

England Women U20 side to face Canada Women U20