Canada ready to take on France 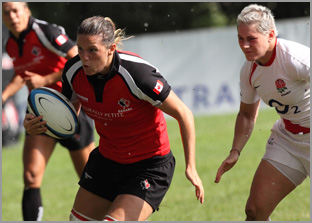 Canada have named a 28-player squad to contest two test games against France later this month. The Canadians will play one of their games at the Stade de France as part of a unique double header with the game coming three hours before the French mens side take on Samoa.

The squad includes four new faces. Andrea Burk, Corinne Jacobsen, Darcy Patterson and Shannon Kane could possibly earn their first caps on the two-match tour, while Araba Chintoh returns to the Canadian side after playing her last match for Canada in 2004.

The Canadian team will meet in Paris on November 12 before traveling south to Dijon where they will have three training sessions a day for the next week. Their first match is to be played in Dijon on November 18th at 18.00.

The squad will remain in Dijon until traveling back to Paris on the Friday before the pinnacle Stade de France test. The historic match kicks off at 15.00 in the 80 000 person capacity stadium.

After their test match, courtesy of the French Rugby Federation (FFR), the women will watch Samoa take on France in a full test before being hosted in a joint post-match function with the mens sides.

Tour preparations and the birth of his second son, Henry, have kept Canadas head coach Johnathan Long busy since the Nations Cup in August.

With less than 10 months to the 2010 World Cup in London, Long says this tour has bigger implications for his squad.

This is really the beginning of our World Cup preparation. We have been setting targets with the players and this will be the first opportunity to gauge how far we have come during the past 6 months of an intensive program set for the girls.

Canada will be looking for revenge over the French who beat them on Canadian soil at the Nations Cup on a scoreline of 12-7.

To win in [Frances] backyard would give the team a tremendous boost, but I am most concerned with our performance and the ability of the team to build on the how we want to play which everyone got a taste of in the first half against South Africa during the Nations Cup, long said.