Canada set the pace in CanAm

Saturday could offer a small piece of history after Canada beat the United States in the first CanAm test at the Chula Vista Elite Athlete Training Centre in San Diego, California. 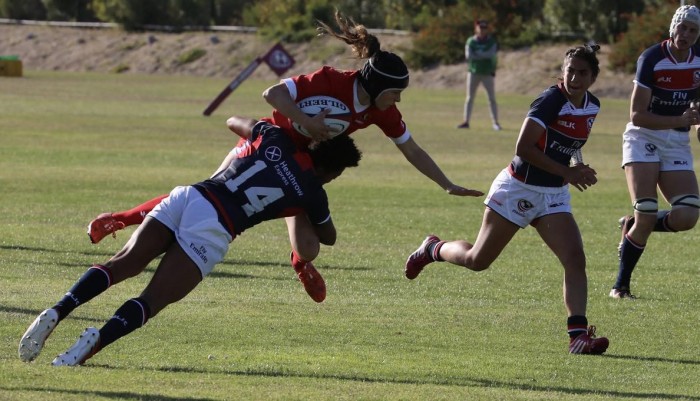 Canada and the United States have been played “CanAm” tests since 1987 – one of the oldest rivalries in rugby. Wednesday’s game was the 35th in the series – and Canada’s win mean that on Saturday they could, for the first time, draw level in the series.

And after the first of two matches in the series the Canadians look strong favourites as, after a fairly tight opening 40 minutes, they took advantage of a Christiane Pheil’s yellow card to pull away and win 39-5 - recording their third biggest winning margin in the 30-year history of the series.

As is so often the case, with several core sevens players in the squads returning to fifteens (especially the USA), much of the early exchanges were played in a near sevens style - long, powerful runs, hard hits, quick passes, grubbers and chip kicks to often put the defence on the back foot.

It is terrifically entertaining rugby, but exhausting especially over a tournament and is also a style that well-drilled fifteens-specialist teams can often pull apart as possession is given up too easily, and so it proved in the opening quarter of the match with before Canada finally broke through with a try from Karen Paquin. USA quickly responded with a try of their own to bring the match even at 5-5, but after that it was all Canada.

Carolyn McEwen added a try before half time to give the Canadians a 10-5 lead at the break.

And with the Americans down to 14 players early in the half because of the yellow card, Canadian substitute Tyson Beukeboom touched down to extend Canada’s lead to 15-5.

Soon after, captain Kelly Russell got in on the action with a try of her own to put Canada up 20-5, after which Beukeboom then went in for back-to-back tries, giving her a second-half hat trick.

Finally, Canada added a late converted try as they finished one point shy of the 40-point mark.

"When you play the Americans, you need to respond to there physicality first and then you can play a bit wider. We didn't perform in the first half, but the second one was better. We knew our scrum would keep us in the game. To perform on Saturday we will have to be better in reading and executing."

"Heading into Saturday, it's about consistency and understanding what we're trying to do. The Canadians showed their experience by taking it to us in the second half. We were able to respond in pieces, but not consistently."