Canada completed a 2-0 series win over the United States yesterday evening (24th November), racking up their highest ever points total against their oldest rival. 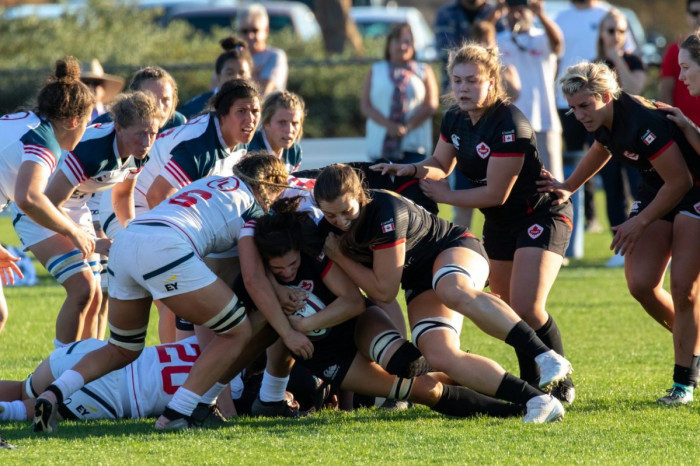 Picture: USA Rugby. Report: Based on report from USA Rugby

Although the United States started the test well, Canada kicked up a gear especially in the second half to record one of their best performances in this 32 year-old 37-match rivalry.

However, despite losting 27-52 in the end, the US Eagles never gave up despite the loss being harsh reality for two thirds of the game. The home team again made multiple visits inside 22 but repeatedly failed to turn these into points.

“We are a little bit frustrated, we made a lot of mistakes,” said wing Sarah Levy who scored her first two international tries today.

“There were a lot of moments of brilliance and the teammate support throughout the game was really up there. Every time we huddled we were really bringing each other up and it was a great experience overall even though we did have some downfalls. There’s no better feeling than a try and an international one is top notch so I’m really happy [with that]."

The first twenty minutes were by far some of the best displays this year by the Eagles. After getting into Canadian territory early, the team applied significant pressure to force a pair of scrum penalties so Bui Baravilala could slot three points to give them an early lead.

After that, setup by Alycia Washington, Sarah Levy dazzled supporters with the first of two beautiful runs along the wing right, putting the United States ten points ahead. Though Canada answered back with their own try in the corner right after, Levy came back with another thanks to a perfect run and offload by Emily Henrich.

But that early lead was deceptive. By halftime, Canada had taken control and were 15-19 ahead, despite the bulk of possession and space being won by the U.S. And after the interval Canada came switched up another gear and dominated the field.

By the 54th minute, the U.S. opposition were up 15-40 with tries coming from intercepted passes, gaps left open and quick passages of play that were too challenging for the USA’s defence to cover.

The U.S. had their moments but, as has been the challenge through the Can-Am Series, the team struggled to turn opportunities into points.

Charli Jacoby and Bui Baravilala finally broke the scoring drought when Jacoby drew in defenders and cleared space for Baravilala to claim the offload, escape a tackle and score. But even going down to 14 players for a period did not stop the visitors, who added two more tries before at the end of the game, U.S. captain Kate Zackary swooped around the corner to close the match with one last Eagle try.

As well as winning the series, the win also brings Canada to within one win of the USA in the overall history of the fixture. They now trail just 18-19 overall, having won seven of the last ten tests between the teams. Their 52 points was the most they have ever scored against the United States, and the first time the USA have conceded 50 points in a game to anyone other than England or New Zealand.