In pouring rain, and ending just before a thunderstorm, Canada beat the United States in the first of a two-match series at the Chula Vista Elite Athlete Training Center in San Diego yesterday (20th November). 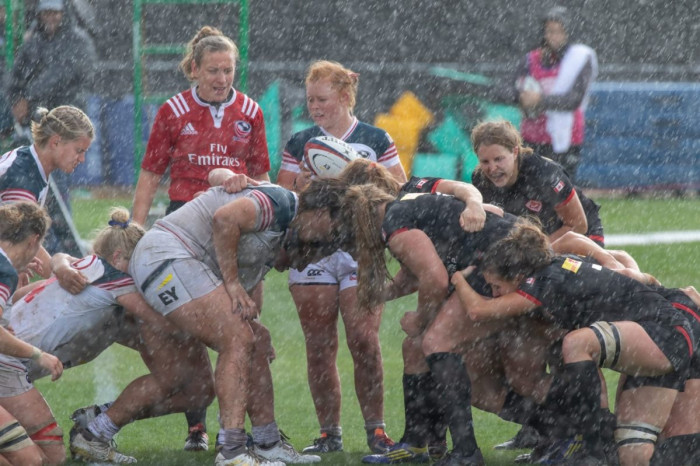 In increasingly challenging conditions, the United States and Canada battled against wind, rain and slippery grass to maintain control of the ball and play to their strengths.

At the start of the game, the Canadians threatened American line inside their 22, monopolizing possession while the Eagles scrambled in defence to cover gaps. Finally, from a lineout on the five-metre line and the Canadians found a way through to put the first points on the board. 0-7.

Conditions ensured that the game was based around scrums and kicking as each side battled for an attacking edge. US flyhalf Gabby Cantorna put a few goof kicks through the air but the Canadians were dominant in the kick-chase and countered with a buzzing attack in most situations.

Around the 30th minute, with Canada still only up by seven, the USA’s Catie Benson pushed herself over the tryline only to find the ball was held up. The sequence would plague the United States throughout the game as Kate Zackary would nearly score before the ball was knocked on and multiple trips inside the opposition 22 were halted by handling errors.

Canada scored two more tries at the end of the first half and beginning of the second half. Canadian winger Irene Patrinos found a margin of space in the corner and Janna Slevinsky caught the U.S. off guard and squeezed through a patch of space.

From the 60th minute and well past the 70th minute, the Eagles threatened inside the Canadian 22, just as Canada had at the start of the game. The United States maintained its determination and intensity until the very end, when the match was called off two minutes early due to lightning in the area.

“There were some moments that we should have expected more of ourselves,” said Captain Kate Zackary. “Despite the conditions, we made adjustments to our game plan and tightened up some of our forward movements.

“We gave opportunities to our packs where we could, they carried extremely hard. We had a lot of really strong carries from Amy Naber-Bonte and Leti Hingano on the backline.

“Unfortunately, we made a few visits to the 22 and didn’t come away with a try. The girls did a great job digging in, making those [Canadian] tries hard and we’re looking forward to a dry game on Sunday.”